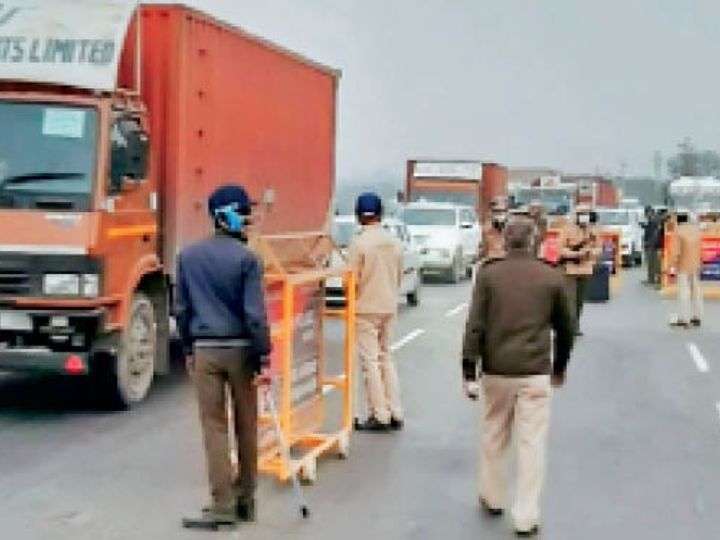 Gurgaon Police stationed on the highway

The Gurgaon Police has been put on high alert in view of the warning of farmers blocking agitation against agricultural laws. The ADGP has issued orders to put more and more police forces on the streets. He also said that the police can take necessary action to maintain law and order anywhere.

In such a situation, the directions of the officers have been forwarded to all the police in-charges on the Delhi-Jaipur Highway, KMP Expressway and Sohna Road Highway. At the same time, police force has also been deployed at the plaza on Kherikadola toll. At the same time, the concerned ACP has also been ordered to monitor the entire city by taking rounds on the highway.

Apart from this, 59 duty magistrates have also been posted in the district. At the same time, the duties of DCP and ACP have also been put together. The agitating farmers have announced a blockade on the highway for three hours on Saturday.

Rakesh Tikait, the national spokesperson of the Indian Farmers Union, has told the farmers not to jam the wheel in Delhi, so farmers who have not reached here, where they are, should block the wheel for three hours. This has alerted the police in NCR districts. Since Friday afternoon, all the police in-charge in Gurgaon have also been asked to deal with this traffic jam.

Duty magistrates have also been posted to maintain law and order in the district. In such a situation, the Police Commissioner KK Rao has also appealed to the farmers not to take the law in their hands anywhere. Can protest in a peaceful manner. But do not stop the highway etc. by obstructing traffic anywhere.

United Kisan Morcha supported Chakka Jam
United Kisan Morcha has supported the Chakka Jam. The people of the Morcha are sitting on indefinite dharna near Rajiv Chowk. The president of the Morcha and senior advocate Santokh Singh said that they will express their protest in a peaceful manner. The strike will continue till the agricultural laws are withdrawn. The government has created an atmosphere like Pakistan borders on Delhi borders. Wire fencing is being done. Punishment is being done.

Police vigilant to maintain law and order: KK Rao
Police Commissioner KK Rao said that the police is constantly on alert. In any case, attention is being paid not to affect the normal life. Policemen have also been told to check the vehicles in such a way and keep an eye on the suspects so that there is no jam anywhere. Under no circumstances should people be troubled.