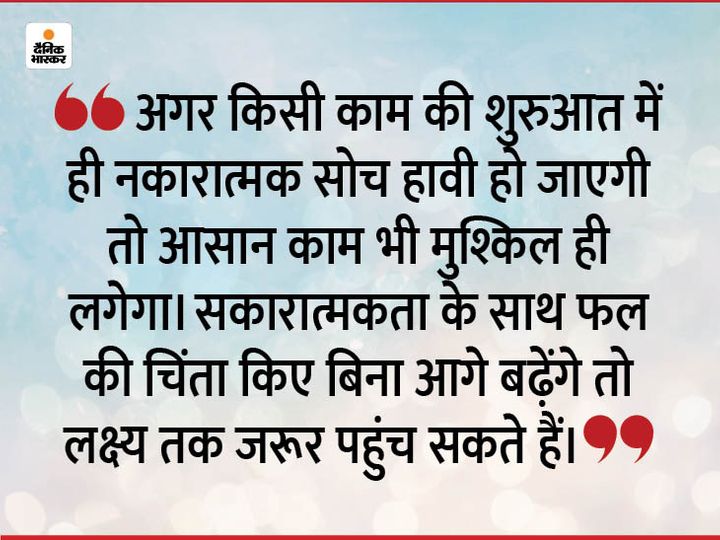 story- The war of Mahabharata was about to begin. On the Kauravas side there were maharathis and innumerable soldiers like Bhishma Pitamah, Dronacharya, Karna, Ashwathama. Whereas, the Pandava army was much less than the Kauravas. Apart from Arjuna and Bhima, few Maharathi Pandavas were in the army. At that time, Yudhishthira also agreed that the Pandavas would not be able to stand for long in front of the Kaurava army.

Seeing the situation of the armies, it seemed that the Kauravas would win in this war. There was less enthusiasm in the Pandava army. Because of this, negativity was dominating the Pandava army. Then Arjun explained to his army that even though we are few in number, we have to make our efforts with honesty. We have Sri Krishna with us, we are fighting for religion. We should not think of defeat. Have to fight with positive thinking, what will be the result, it is in the hands of God.

These things of Arjuna brought excitement back into the Pandava army. All agreed to go to war with complete honesty. After this the Kaurava army was defeated by the strategies of Sri Krishna and by the might of the Pandavas. Those who relied on luck saw the defeat of the Pandavas at the beginning of the Mahabharata war, but positive thinking changed the results.

Learning No matter how difficult the task, we should protect ourselves from negativity. If the fear of failure is at home, then even the simple work will not be completed, so always keep thinking positive and keep trying.