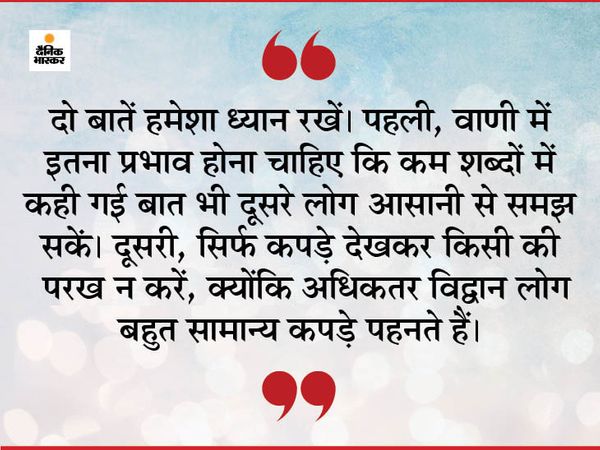 story – When Swami Vivekananda was in America, many incidents happened to him. Everyone had different experiences. On returning to India, Swamiji used to tell those companions about his experiences in an interesting way and used to explain the lessons learned from them.

Swamiji used to say, ‘I have learned many things from all the incidents that have happened to me in America. If I can learn, then you too can learn from those events. ‘

One day Swamiji was walking in a garden in America. He was wearing plain clothes and did not even have a cap on his head. Others in the garden were wearing hats and suits over their heads. When they saw Swamiji, they were surprised, because Swamiji’s clothes were very different in color and he did not even wear a hat.

Swamiji suddenly stopped, turned and asked the people there in English, ‘Brothers, are humans tested in your country by looking at clothes?’

On hearing these questions, the Americans present in the garden fell silent.

Learning – We get two lessons from this topic. First, one should never judge by looking at his clothes, because most of the learned people wear very normal clothes. Secondly, you should have such influence in your speech that others can understand our words very easily in very few words. Before speaking any thing, think well once and in what kind of voice it is to be spoken, so that the listener will immediately understand our point.