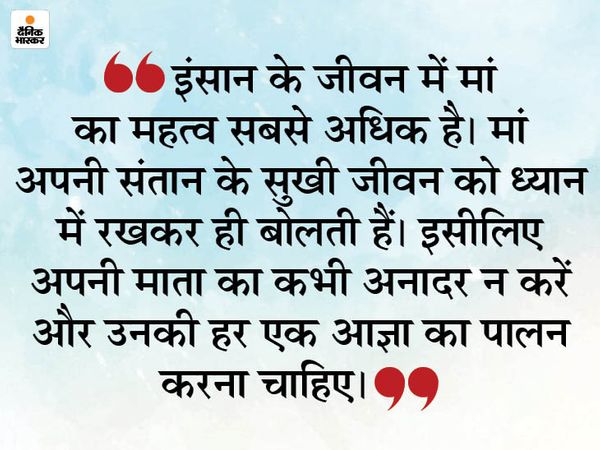 story – In Dwapar Yuga, Akashvani told Kansa that the eighth child of Devaki and Vasudev will kill you. Hearing this voice, Kansa locked her sister and brother-in-law in prison. Kansa killed Devaki-Vasudev’s six children as soon as he was born.

Balarama was born as the seventh child, who was sent to Gokul by the Lord’s Leela. After this, Shri Krishna was born as the eighth child. After birth, God appeared in his quadrilateral form to Mother Devaki. Devaki turned his face when he saw his child in the form of God.

God said, ‘Devakiji, you had taken a boon by doing austerity that if I come here as a son, now I have come, but why are you turning your face away?’

Devki said, ‘You said that you will come as a son, but you have come as a divine being. I want a son If you want to give the fruits of my penance, keep your word, then as a child, come in my lap. ‘

On hearing this, God left his quadrilateral form and came into the lap of mother Devaki as a child.

Learning – With this incident, Shri Krishna has given the message that when I was born as Krishna, I obeyed my mother first. The most important importance in our life is that of the mother. That is why a man should take small matters of his mother as education, even if the mother is less educated. Mother speaks only after keeping the happy life of the child. Do not disrespect the mother and obey her every command.