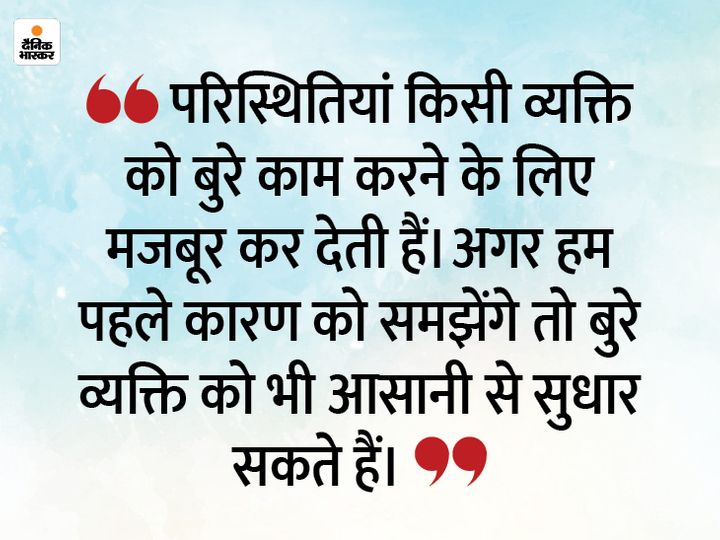 story – Many people used to visit Mahatma Gandhi’s ashram everyday. Everyone trusted each other, so there was openness in the atmosphere of the ashram. One day the people of the ashram caught a person stealing. Then they thought that this thief should be presented before Gandhiji.

Everyone reached Gandhiji with the thief. At that time Gandhiji was having breakfast. People told about the thief and said, ‘This person does not know how long he has been stealing in the ashram, you give it the appropriate punishment.’

Gandhiji stopped the breakfast and looking at the thief from top to bottom, said, ‘You people caught it, that is fine, but did you ask whether it had breakfast?’

The thief was shocked to hear this, even the people standing there were surprised to hear that Gandhiji was talking about giving a thief a snack. Some people in the ashram understood Gandhiji that they deal with problems differently.

Gandhiji said, ‘You do one thing first, make it breakfast, then decide it.’

People said, ‘Bapu, what punishment was this? How can a thief get breakfast? ‘

Gandhiji replied, ‘First of all it is man. First feed it. Hunger is felt by both the honest and the dishonest, the criminal will feel it and the punisher will also feel it. Right now it is in our bond, it is our responsibility to eat and drink it. When its stomach is full, then we will ask it why it did this and after that it will also give the right punishment. ‘

Learning Gandhiji taught the people of the ashram that day that we should end the evils, not the bad ones. If we understand the reason for the evil, then even the bad person can be easily corrected.