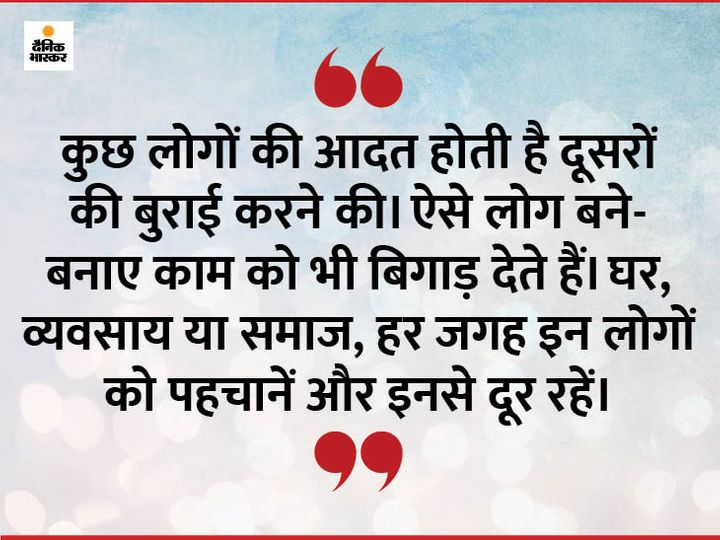 story- In the Ramayana, King Dasaratha announced that Rama would be crowned on the next day. With this announcement, the entire Ayodhya was happy with Kaushalya, Sumitra and Kaikeyi, but Manthara was sad.

Manthara came into dowry in Kaikeyi’s marriage. His nature was to spoil the work made. She used to enjoy this work and she used to keep trying how to harm others. Manthara was a woman of devious intelligence, mastered in the evil and mischief of others.

The night before Rama’s coronation, Kaikeyi saw Manthara sitting down disappointed. When the queen asked her the reason, Manthara said, ‘Today everyone is happy, but I am sad, because I am thinking about your interest. If Ram becomes king, he will put you and your son Bharat in jail along with Kaushalya. ‘

Hearing this, Kaikeyi got very angry and gave Manthara a slap. Kaikayi said, “Don’t make evil of King Dasharatha, Ram and Kaushalya in front of me.”

Manthara did not lose courage, even after eating Chanta she kept saying such things slowly, which would change Kaikeyi’s mind. She knew Kaikayi’s weakness very well. Kaikeyi got nervous after hearing some things about Manthara. She felt that she was right.

Rani asked Manthara, ‘Now you tell me, what should I do?’

Manthara said, ‘King Dasaratha has given you two boons. You both ask for a boon. In the first boon, take 14 years of exile for Rama and in the second take the coronation of Bharat.

In this way, Kaikeyi, who loved Rama very much, came to Manthara’s words and sent Rama to exile.

Learning In home, business and society, we should keep in mind that there are many people around us, who enjoy doing evil and cheating. Such people talk here and there and spoil the work done. When we start trusting the things we hear, then our loss is definitely there. Such people should be avoided, who condemn and spoil good works.