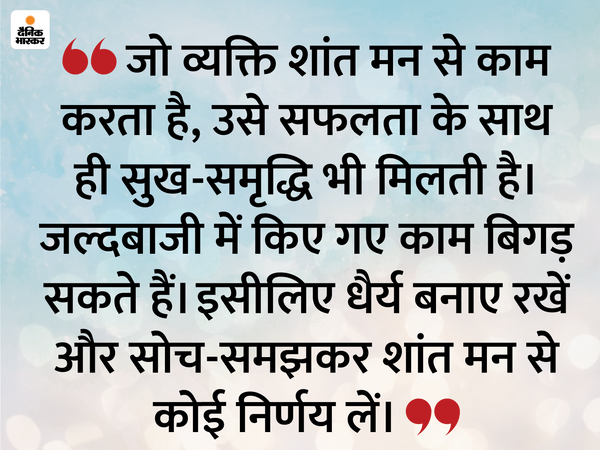 story – In the old times, all the sages and monks gathered and all started thinking that Brahma, Vishnu and Mahesh, these three gods are superior, but who is the best among these three? The three gods have different qualities.

Bhrigu Rishi was entrusted with the task of examining the superiority of these three deities. The sages said to them, ‘Find out who is the best among these three?’

Bhrigu Rishi first reached Brahmaloka and sat near Brahmaji. Brahmaji did not like that someone came and sat near him. He got angry at Bhrigu Rishi, but he did not say anything. Seeing the gestures of Lord Brahma, Bhrigu understood that he does not like it.

After Brahmaloka, Bhrigu reached Shivloka. As soon as Shivji saw Bhrigu Rishi, he himself got up and reached her and tried to hug her, but the sage refused to do so and retreated.

Bhrigu said to Shivji, ‘You have consumed the pyre, I cannot touch it.’ Shivji got angry on hearing this, he lifted the trident. At that time Goddess Parvati pacified Shiva. Bhrigu Rishi understood that the reaction here is more aggressive than Brahmaji. After this he reached Vishnulok.

Vishnu was resting. Bhrigu rishi approached the Lord and smacked one leg on Vishnuji’s chest, but Vishnuji was not angry. He immediately got up and grabbed the sage’s leg and said, ‘Many enemies have hit my chest. My chest has become very hard after bearing all the blows. Your feet are soft, do you not get hurt due to this? ‘

Bhrigu Rishi returned to all the sages and said to everyone, ‘In my eyes, the best Vishnu is and that is why they are doing the work of rearing.’

Learning – The purpose of this story is not to compare the gods. Actually, the sages created this leela to teach us. The lesson of this story is that we should not lose patience in any situation. Shanti is our jewel. If we have to do something big, then we should be patient. In haste, work can go haywire.