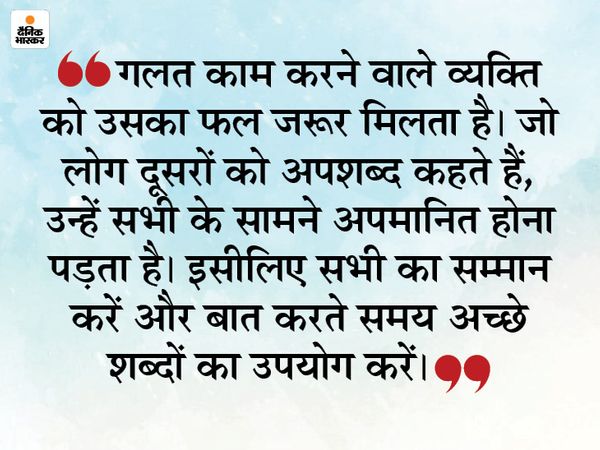 story – One day Swami Vivekananda was going to give a lecture in a village. He was accompanied by many disciples. On the way there was also the house of one of his opponents. Swamiji’s opponent got angry when he saw him.

The man hated Vivekananda. As soon as he saw Swamiji, he ran to them and started abusing them loudly. Swamiji ignored his words and they kept on going. The opposing person was also following them and shouting profanities.

All the disciples who were walking with Swamiji were getting disturbed by the wrong behavior of that person, they saw Swamiji moving in peace while talking to everyone. Nobody stopped the opponent, otherwise he became free, and started using more dirty words. He was crossing the limits while abusing.

Shortly thereafter, they reached the boundary of the village, where Swamiji was to preach. Swamiji stopped at the border of the village and said to that opposing person, ‘Look brother, you are very learned. You have a store of words. By abusing those words as much as you could have given me, you have given. I want to go to this village. Now you stop here, because after me you will come to this village and keep abusing me like this, then my devotees at the meeting place will punish you and I will not be able to save you from them. I feel sorry that a scholar like you was beaten up because of me. You will be beaten and I will sin. It is good that you stop here and go back. Take back the gift you have given me, too. ‘

The person was shocked to see Vivekanandji’s behavior. He did not expect such behavior. He fell at Swamiji’s feet and started apologizing to him.

Learning – Swamiji explained to the person that if you do wrong things with anyone, you do not know how to get punishment, because you get the fruits of your actions. That’s why treat everyone with respect. Use good words. Do not talk wrong for anyone.