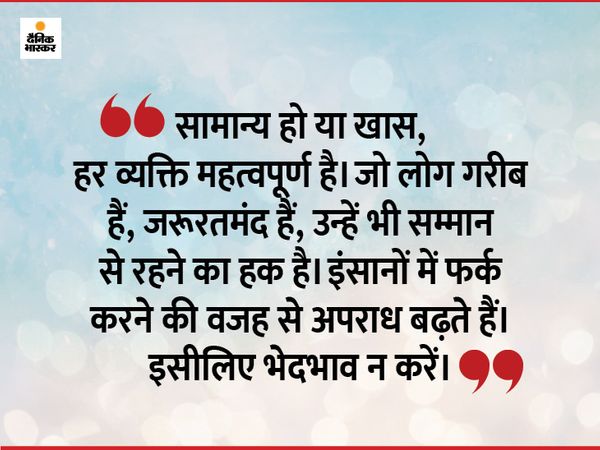 story – There used to be a disciple named Anand Swami with Mahatma Gandhi. When he lived with Gandhiji, he considered himself very special. Gandhiji’s views in this regard were very different.

Everyone has their own way of distinguishing between a common and a special person. Some people do not understand the common man. The common man means one who is poor, illiterate, needy. Those who are capable, ie those who have more wealth than the person in front, are more famous, if they have a big post, then they start thinking of themselves as special.

One day Anand Swami was on a journey with Mahatma Gandhi. During this, Anand Swami had an argument with a normal person. When the common man made a comment about something, Anand Swami slapped him. That person was very normal. Due to this, after slapping, he stood on one side. He could not even speak anything to Anand Swamy. After some time this matter reached Gandhiji.

Gandhiji could have proceeded by ignoring this thing if he wanted, but he asked Anand Swami, ‘did you slap that person?’

Anand Swamy replied, ‘Yes, I was angry at that time and my hand got up on him.’

Gandhiji said, ‘Well, you were angry at that time, but now your anger has calmed down, go and apologize to him.’

Anand Swami did not like the fact that a normal person would have to apologize, but if Gandhiji had the order, Anand apologized to that person.

Later Gandhiji asked him, ‘How do you feel now?’

Anand Swami said, ‘Feeling light. What I did was not right, but after apologizing it looks a little good. ‘

Gandhiji said to him, ‘Never think that you are special and the other is common. All human beings are equal for the divine. We make common and special, but even then because of education, position, prestige and being with me, you became special, so do not ever think that other people are normal. Respect for the soul is equal for all. ‘

Learning – In society, there is a difference between common and special humans. Due to this difference, crime also increases. Those who are despised become criminals. God does not discriminate among humans. That is why everyone should be respected.