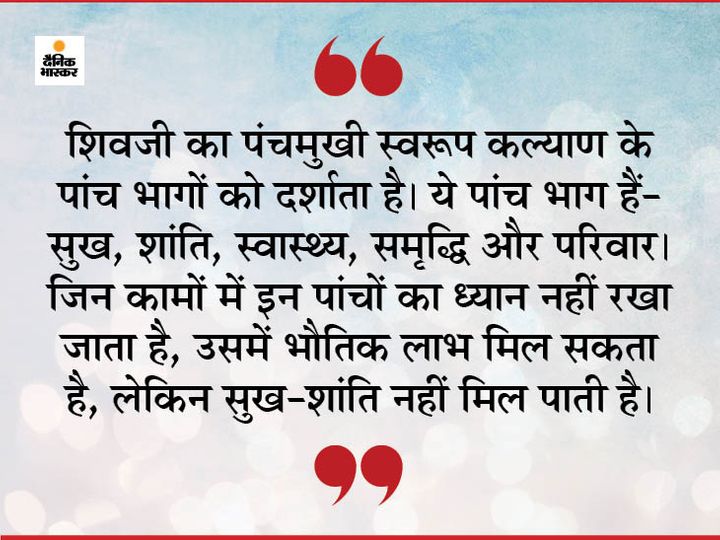 story – The beginning of Shivpuran tells the story of a husband and wife named Binduk and Chanchula. Binduk’s conduct was not good. She died shortly after marriage.

Chanchula without her husband could not maintain her conduct for a long time and she too started doing wrong things. One day he began to regret his wrongdoings. She started listening to the legend of Shivpuran. When he died, his soul reached Shivlok.

In Shivloka Chanchula sees Ganeshji, Nandi, Veerabhadreshwar and Parvati, but Chanchaula is surprised to see Shivji’s form, because Shivji was in Panchmukhi form.

Someone asked the author, ‘Why is Shivji’s Panchamukhi form depicted in the first chapter of Shivpuran?’

The author replied, ‘Shiva is a form of welfare. And, welfare has five parts. These parts are happiness, peace, health, prosperity and family. A scripture like Shivpuran is beginning and Shivji is showing his Panchmukhi form and is giving the message that whenever a campaign or a work is started, there must be a sense of well-being. And, that welfare should be divided into these five parts. Only when these five parts are okay, only then can our greatest welfare be. ‘

Learning Whenever we do any work, then take care of happiness, peace, health, prosperity and family in it. Without these five, if we do a big job, then we can get material benefits, but we cannot get happiness or peace.