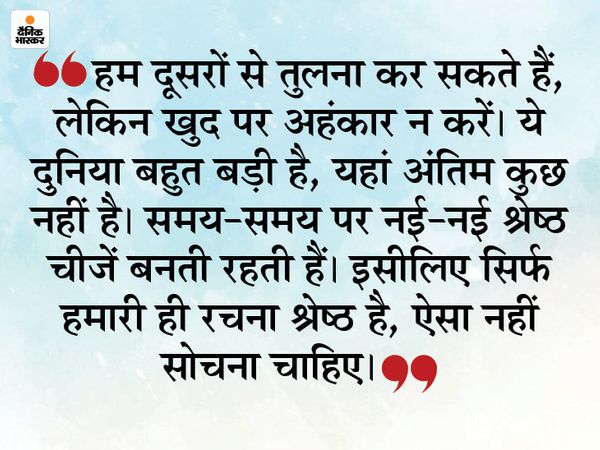 story – Indra, the king of the gods, once built a very beautiful palace. The palace was also special because it was built by Vishwakarma, the architect of the gods. Devraj Indra used to invite everyone to show his palace and exaggerate about the palace. Indra’s arrogance would have increased when everyone praised that palace.

Gradually Indra started saying that there is no more beautiful palace than my palace in the whole world. One day he called Devarshi Narada and said, ‘You roam the whole world, see a lot. See this palace of mine, and tell me, even better than this palace has been seen anywhere else?

Naradji said, ‘What information will I give about it. I definitely roam, but the correct information will be able to give you Lomash Rishi, because he is a thousand years old. It would be better if you ask them.

Devraj Indra called Lomash Rishi and showed his palace, saying, ‘Have you seen any other palace like my palace?’

Sage Lomash said, ‘Devraj, I have seen many Indras in my life. Have seen one king each. They have seen their palaces too and all of them were even more beautiful than this, but now all those palaces have been destroyed. This is the order of the world. The palace you are egoizing on will also fade one day and end. In this world, the last and the second is nothing. You have become the pride of being the first and the best. ‘

Learning – Sage Lomash explained to Indra, ‘This world is very big. Compare others, but do not be arrogant. Your work may be excellent, but it is wrong to underestimate the work of others.