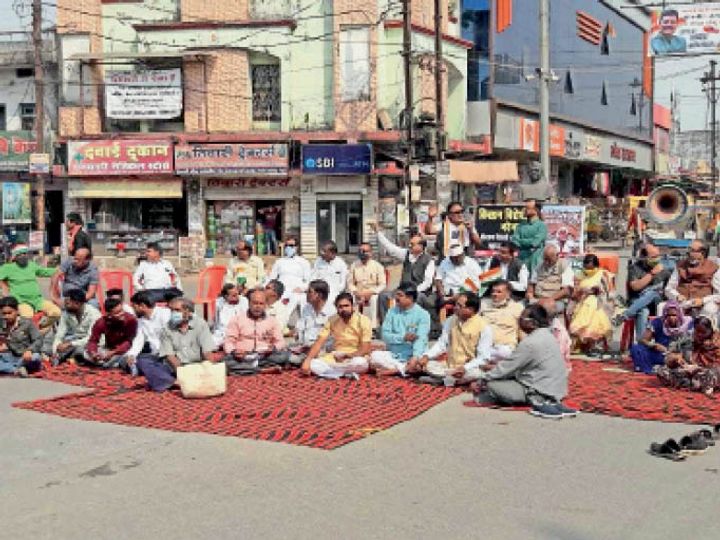 Farmers across the country spent three hours in protest against the three agriculture bills passed in the House by the central government. Congressmen started arriving at 12 noon in front of the statue of Netaji of the district headquarters. Gradually the number kept increasing. By half past two in the afternoon, the crowd had become a bit good, chairs were full, people had to sit on the floor in the ground.

Initially, the carcass also started to get smaller and then increased. The crowd continued here as long as it was photographed. Around half past two, the crowd of Congressmen began to come out.

At 3 in the afternoon, there was not a single Congressman sitting in Dari. 22 people remained seated on the chair while some people kept walking around and discussed with the tea shop or the policemen. Chakkaajam ended at 3:10 pm after the address of the last speaker, Ms. Sasikanta Rathore.

The District Congress Committee had informed the police on Saturday for three hours in support of the farmers. The agitation started at 12 noon at Netaji Chowk in the district headquarters, where the congressmen gathered. Police surrounded the road leading to Naila Road, Akaltara Road, Kachhari Chowk and link road barricading all around.

Police surrounded the Congressmen within a radius of ten meters. A large number of police forces including ASP Sanjay Mahadeva, DSP Dineshwari Nand, Tehsildar Atul Baishnav reached Netaji Chowk. SDM Maneka Pradhan in the rear link road sat in his car for about two hours and monitored the situation.

She left the scene at around 2 am. During this, the speakers called the Central Government’s agricultural bill as anti-farmer, calling it an injustice to the farmers and demanded its withdrawal.

Traffic starts again at 3.10 pm
Chakkaajam was conducted for three hours only. But the address of Congressmen was not completed by that time. During this time there was not even one sitting in the carriage, but in the chairs the Congressman was sitting. Ms. Sasikanta Rathore was the last speaker after Dinesh Sharma. The barricades of Naila Road were opened while she was speaking.

When the barricade of Akaltara Road was also being opened, then the Chief of Police Bhagwan Das Garhwal had to go to the police and tell them not to open now. Traffic started as soon as the speech was over at 3:10.