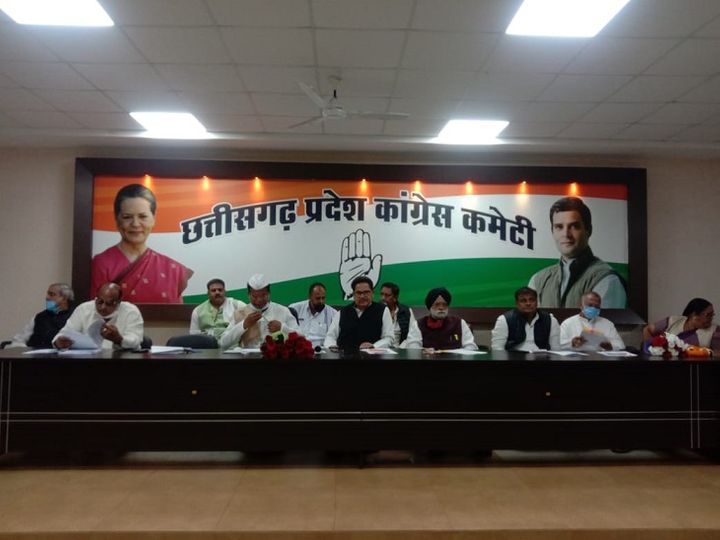 The picture is of Raipur. All big leaders were present in the Congress office, during which it was agreed to re-appoint Rahul Gandhi as president.

An important meeting was held on Saturday afternoon at Congress Bhavan in Raipur. State in-charge PL Punia had specially reached Raipur from Delhi to attend this meeting. In this meeting, the proposal to make Rahul Gandhi, the national president of the Congress, was passed. State Congress spokesperson Vikas Tiwari said that this resolution was unanimously passed in the meeting of Chhattisgarh Pradesh Congress Executive and District Congress Committee Presidents. All the Congress leaders unanimously said that Rahul Gandhi should be made the president again. In the meeting, the Chief Minister of the state Bhupesh Baghel proposed this. Chhattisgarh state in-charge PL Punia and Chhattisgarh Pradesh Congress President Mohan Markam supported it.

Rahul himself resigned
Rahul Gandhi resigned from the post of Congress President after the 2019 Lok Sabha elections. After this, there were many discussions about who would sit in this post. In the end, Sonia Gandhi was made the interim president of the party. According to sources, the organizational election in the Congress party may be held on May 29. In such a situation, it is expected that in May, the Congress may get a new president. This is not the first time that Rahul Gandhi has been asked to be made the President of Congress. Earlier too, on many occasions, there has been a demand for Rahul Gandhi to be made the President of the party.

Minister and top leaders received these instructions
PL Punia, who came to Raipur on state visit, has given instructions to all the ministers and party leaders of the government. He has said that now everyone should go among the people. Inform people about the better work done by the government so far. It was also said that the promises made by the present Congress government till now should be conveyed to all the people.