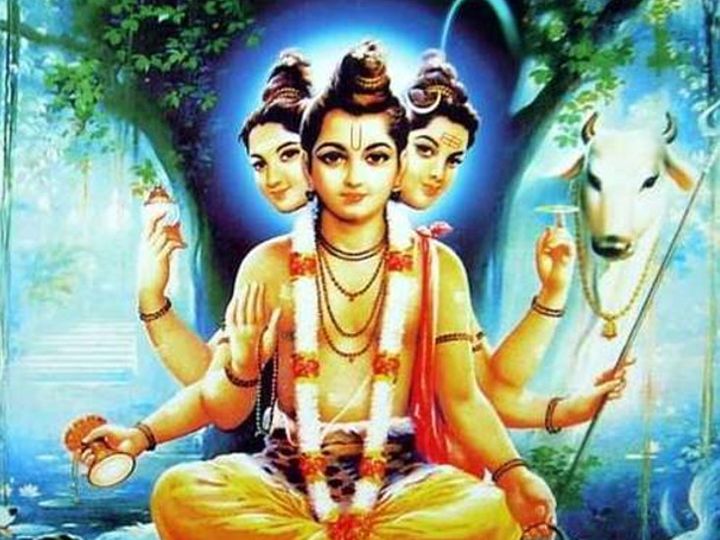 On Tuesday, December 29, the birth anniversary of Lord Dattatreya. Anusaiya and Atri were the parents of the sage Dattatreya. Every year on the full moon of Margashirsha month, the birth anniversary of Lord Dattatreya is celebrated. Dattatreya made a total of 24 gurus in his life. Dattatreya has told us the sources of happy life through these gurus. Know who these gurus were and what can be learned from them …
1. Earth
The quality of tolerance can be learned from Earth. There are many types of strikes on the earth, many types of upheavals, mining operations, but the earth endures every strike.
2. Pingala Whore
Dattatreya had learned from a prostitute named Pingala that money should not be given importance only. The prostitute looked at any man for money only with the same view that he would get money from it. She could not sleep with the desire to get money. One day Pingala awakened in his mind, he realized that real happiness is not in the money but in the meditation of God.
3. Dove
The pigeon pair gets trapped in the trap itself, seeing the children trapped in the trap. Dattatreya learned from the pigeon that too much attachment to anyone becomes a reason for grief.
4. Sun
Dattatreya learned from Surya that Surya is the same, but appears different in different mediums. The soul is also the same, but it also appears in many ways just like the Sun.
5. Air
Just like going to a good or bad place, the basic form of air is cleanliness. Similarly, we should not give up our qualities even when we are with good or bad people.
6. Deer
The deer is so much lost in jumping, music, fun that he does not even have the impression of a lion or any other animal around him and is killed. Learn from the deer that we should never be so careless in fun that we get caught in troubles.
7. Sea
One should remain happy and dynamic even in the ups and downs of life.
8. Kite
The kite is attracted to the fire and burns. In the same way, we should not get entangled in the attraction and false fascination of one’s appearance.
9. Elephant
The elephant becomes enamored of the elephant as soon as it comes in contact. Therefore, one can learn from elephants that ascetics and ascetics should stay far away from women.
10. Akash
Dattatreya learned from the sky that every country, period, situation should stay away from attachment.
11. Water
Dattatreya learned from water that we should always be holy.
12. Honey extractor from honeycomb
Bees collect honey and one day take all the honey extracted from the honeycomb. It can be learned from this that one should not collect and keep more things than necessary.
13. Fish
We should not be greedy for taste. The fish goes to eat a piece of meat stuck in a fork and eventually loses life. We should not give so much importance to taste, eat such food which is good for health.
14. Bird of Bird
One should learn from the bird of the bird that one should give up thinking of keeping things nearby. The Kurer bird presses a piece of meat into the beak, but eats it. When other strong birds see that piece of flesh, they snatch it from the chair. Only after leaving a piece of meat does the Kurr find peace.
15. Child
Learned from a small child that no matter what the circumstances, one should always be relieved and happy.
16. Fire
Dattatreya learned from the fire that no matter what the circumstances, we should adapt to those conditions. Just as the fire remains the same even after living between different woods.
17. Moon
The soul is beyond profit and loss. Just as the brightness and coolness of the moon does not change with the increase or decrease, it always remains the same. The soul also does not change with any kind of profit and loss.
18. Kumari Kanya
You should learn from the virgin girl that you should keep working even while you are alone and keep moving forward. Dattatreya saw a virgin girl who was harvesting paddy. The girl’s bangles were sounding while paddy was cropping. There were guests outside, who were having trouble with the sound of bangles. Then the girl broke the bangles to stop the sound of bangles. Just one bangle left in both hands. After that the girl plucked the paddy without making any noise. We should also work in such a way that others do not face any kind of trouble.
19. shark or arrow maker
Mind should be controlled by practice and quietness. Dattatreya saw an arrow-maker who was so engrossed in making arrows that the king’s ride out of him, but he was not distracted.
20. Snake
Dattatreya learned from the snake that any ascetic should live alone. Also, one should never stay in one place. Knowledge should be distributed everywhere.
21. Spider
Dattatreya learned from the spider that God also creates magic and annihilates it. Just as the spider makes a trap on its own, it wanders and eventually swallows the whole net itself, similarly God also creates the creation from Maya and finally compels it.
22. Beetle worm
With this insect, Dattatreya learned that whether it is good or bad, the mind becomes as it would be.
23. Bumblebee or Bee
Dattatreya learned from Bhure that wherever he learned to learn a meaningful thing, it should be accepted. Just as bees and buffalo take pollen from different flowers.
24. Python
Learned from the dragon that we should become content in life. Whatever is found, it should be accepted happily. Should live happily.