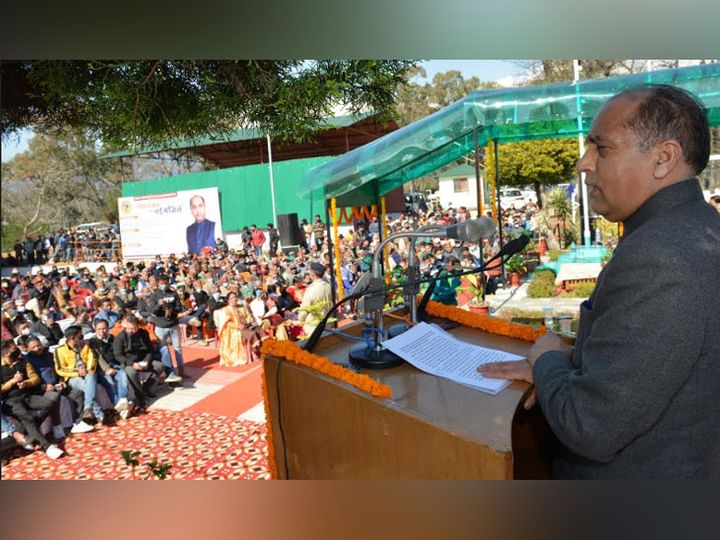 The state government is committed to the welfare of the Gaddi community and will ensure the introduction of new schemes to make sheep farming a more profitable business. On Saturday, Chief Minister Jairam Thakur said this at the Sheep Breeding Conference organized by Himachal Pradesh Wool Federation in Banuri, District Kangra. On this occasion, he also inaugurated a tribal community and training center built at a cost of Rs one crore.

At the conference, the Chief Minister said that during the tenure of the BJP government at the Center and the state in 2000, the Gaddi community was given tribal status. He said that the State Government has directed the Deputy Commissioners and Superintendents of Police to ensure strict action against the criminals involved in the theft of sheep and goats of the Gaddis.

He said that good quality sheep will be made available to the Gaddi community to get high quality wool. Jai Ram Thakur said that the people of the state have given a huge mandate to the current state government in the recently concluded Panchayati Raj Institutions and Urban Local Bodies elections. Out of the 63 panchayat committees declared so far, BJP-backed candidates have won 57 of the committees. The people of the state have ensured the BJP’s victory in all the elections, including the Lok Sabha and Assembly by-elections during the last three years. He said that the people of the state are completely satisfied with the developmental and welfare policies and programs of the state government. The Chief Minister said that the country is safe under the efficient leadership of Prime Minister Narendra Modi. He said that due to timely decisions taken by the Prime Minister, along with prevention of corona epidemic in the country, now a vaccination campaign against this infection has been started in India. He said that the credit goes to the skilled leadership at the national level and the scientists of the country. He said that about 93 thousand front-line warriors are being vaccinated in the first phase in the state. The BJP government has created three new municipal corporations in the state, Palampur, Solan and Mandi to ensure the planned development of these big and fast-growing cities in the state. He said that all legitimate demands of the Gaddi communities would be considered sympathetically.