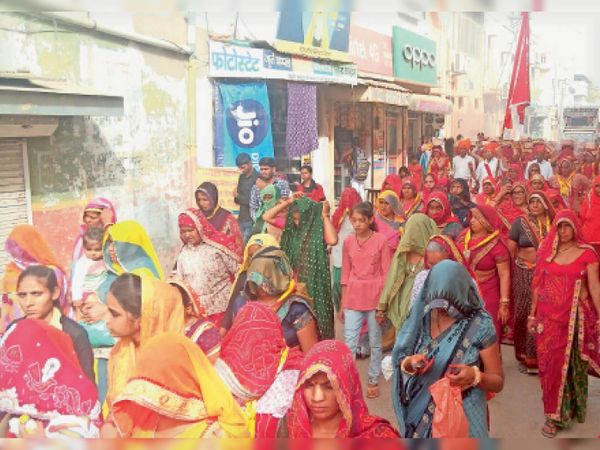 On Tuesday, Surajgarh reached the footpath of devotees on the day of the two-day annual festival of Srishyam Temple of Kakoda. Taking the trail from the Kakoda temple in the context of Shyam Bhagats, the devotees reached the ancient Shree Shyam temple of Surajgarh, dancing and singing in the fun of Baba. Bhagat Manohar Lal Saini of the temple and other Bhagats welcomed the padyatris. After this Baba’s mark was offered in the temple. Many women involved in the batch brought a cigarette to the head.

Pilani |On Tuesday, under the auspices of Shri Shyam Mandal Pilani, the Padjatra left for Surajgarh Shyam Darbar. Under the leadership of Suresh Saini of Mandal, the Pad Yatra started from Kamma Chowk at 9.15 am with the sign of Baba Shyam. During the padyatra, the devotees of Baba were dancing and singing while singing, while the women walking along were singing Mangal songs. Earlier on Monday, Baba’s mark was established at 1.15 pm and special poojas were performed.

BARGAON | On the 26th padyatra on behalf of Sridhyam Seva Samiti Sangh Gudhagoudji left for Khatushyamji from Gopinath temple on Tuesday. During this time, devotees chanted Baba Jayakare and danced and danced with the DJ. Earlier, devotees worshiped Baba’s mark in the temple. Patriot Vinod Joshi, Dayashankar Kedia, Murarilal Kedia, Kamal Kedia, etc. were welcomed by the patrons. Devkaran, Ramswaroop, Manohar etc. were present on this occasion.