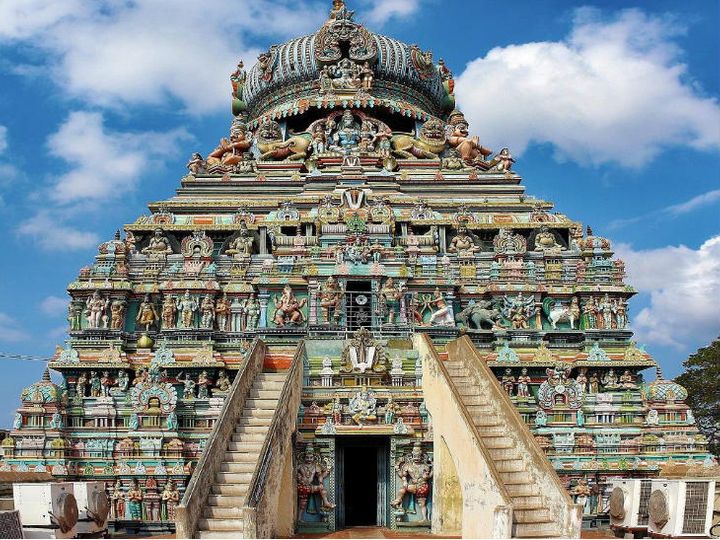 Madurai city of Tamil Nadu is known for its ancient temples. The Koodal Azhagar Temple dedicated to Lord Vishnu is located here. It is one of the major ancient temples of South India. It is beautifully decorated with different colors. According to the inscriptions found here, this temple is more than 600 years old. The temple is said to have been originally built by the kings of the Pandya dynasty from the 12th to the 14th century. Later the kings of Vijayanagar and Madurai built the temple’s main hall and other temples in the 16th century.

6 feet statue
It is a Vaishnava temple. Inside the temple are idols of Lord Vishnu in a seated, standing and reclining posture, made of granite. The statue installed in a sitting posture is 6 feet high. Statues of Sridevi and Bhudevi are installed on either side of the idol of God. Wood carvings are also done inside the temple and depict the coronation ceremony of Lord Rama. The special thing is that the shadow of the shrine of the temple does not fall on the ground.

Koodle Azgar made for the slaughter of Somka Rakshasa
This temple is one of the 108 divine places of Lord Vishnu. Lord Vishnu is believed to have appeared at this place as Koodal Azhagar to kill the demon Somaka, the demon who stole four Vedas from Lord Brahma. This place is also mentioned in the seventh chapter of the Brahmanda Purana.

Five-Level Rajagopuram
There is a granite wall surrounding the temple, which surrounds all the temples inside it. The temple has a five-tier Rajagopuram. The shikhara of the temple is made up of eight parts, with paintings of sages, Dashavatara, Lakshmi Narasimha, Lakshmi Narayana and Narayana Murthy. The temple also has the idols of Navagraham i.e. nine planet deities. These nine planets are believed to affect every object in the universe.