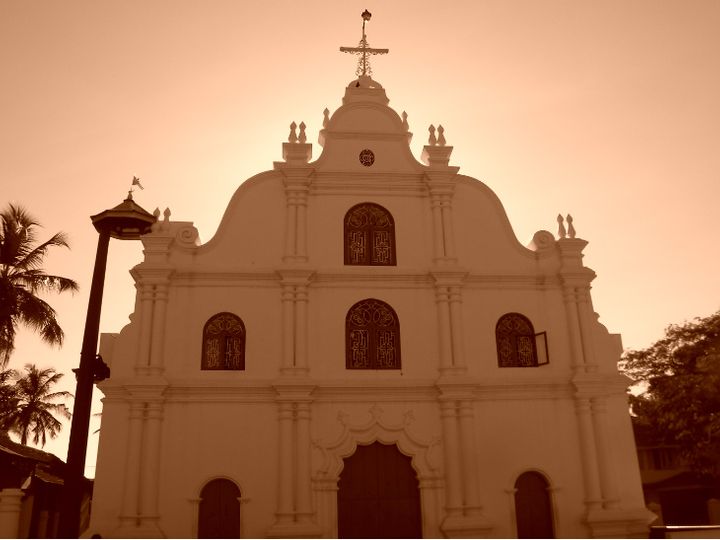 There are many old churches in India. Which were built by the Portuguese and the British. Many people come to these churches to pray on Christmas. There are years old churches in many cities in the country including Kerala, Goa and Calcutta. Of these, the first European church in India is located in the city of Kochi in Kerala. At the same time, the church of Ernakulam in Kerala is 400 years old. St. Paul’s Cathedral in Kolkata is the first church in Asia that was built after a saint. Apart from these, The Our Lady of Immaculate Conception of Goa is a 478 year old church.

1. St. Francis Church, Kochi: First European Church of India
St. Francis Church is in the city of Kochi in Kerala. It was made in 1503. It is considered the first European church of India. There is also a belief associated with this church that Vasco-de-Gama, the great Portuguese sailor, was buried in this church after his death. This church has a special place in the cultural history of Kochi. This church is very famous at present. Thousands of people visit here every day. Many old and historical things are present here, which entice people to come here.

2. Our Lady of Ransom, Kerala: Joined the list of national pilgrimage places in 1951
The church called Our Lady of Ransom in Ernakulam, Kerala is also known. It is affectionately called as Vallarpadathamma by Jesus by the people here. This church was built in 1524 by some Portuguese. However, in 1676 it was broken due to a heavy flood. After this the church was rebuilt. It was also given the status of a national pilgrimage site by the Government of India in 1951. Apart from Kerala, people come from other states to visit this church.

3. The Our Lady of Immaculate Conception: 478 years old church
The Our Lady of Immaculate Conception Church has been established in Goa’s capital Panaji. It not only recognizes India but due to its antiquity and religious importance all over the world. It was built in 1541 as a small worship site. It then took the shape of a huge and beautiful church during 1600–1609. The 478-year-old church’s main worship site has been dedicated to Mother Mary. Apart from the main altar, it also has two other gold-plated alters which are on the side of the main altar. Jesus Crucifixion on the left side and the right side are dedicated to the Lady of Rosary. It also has marble statues of St. Peter and St. Paul. The interior of the church is very colorful.

4. St. Paul’s Cathedral, Kolkata: First Church in Asia named after a saint
The St. Paul’s Cathedral Church in Kolkata was the first church in Asia to be built after a saint. Therefore it is called the first Episcopal Church of Asia. The interior of this church depicts sacred deeds. These churches are considered to be a unique piece of Gothic architecture. Its foundation stone was laid in 1839 and was formed in the year 1847. This church looks somewhat like Norwich Cathedral in England. It has also been destroyed twice due to the earthquake, which has been rebuilt.