In Kedarnath Dham, the weather becomes adverse during winters. Due to this, the doors of the temple are closed.

From today, the two dhams of Uttarakhand Kedarnath and Yamunotri kaput have been closed for the winter. The doors of the Gangotri temple were closed on Sunday. In this way, three out of four dhamas are closed. The doors of the fourth Dham Badrinath will close on the 19th. Till then, devotees can visit Badrinath. This year Kedarnath had the least number of devotees. Due to the corona epidemic, only 1.35 lakh people reached here, while in 2019, 9.5 lakh people came.

Kedarnath and Yamunotri have been experiencing snow since Monday morning. Kedarnath temple was opened at 3 am. Here the chief priest Shivshankar Linga performed the Samadhi Puja of the Lord. The garbhagriha was closed at 6.30 pm with Lord Bhairavnathji as a witness and the assembly hall, main gates have been closed at 8.30 am. In the afternoon, the kaputas of Yamunotri Dham were also closed after special poojas. 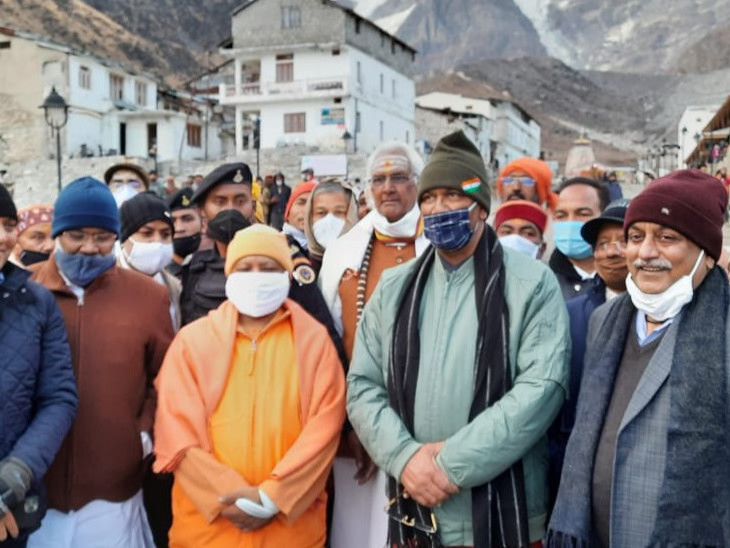 Media in-charge of Devasthanam Board, Dr. Harish Gaur said that more than 1 lakh 35 thousand people have visited Kedarnath this year. This morning the Lord’s Doli left for Rampur after the closure of the valve. The Lord’s Doli (palanquin), Guptkashi, will arrive at the Vishwanath Temple on 17 November. On 18th, Utsav Doli will reach the winter seat at Omkareshwar Temple Ukhimath. After this, winter worship of Kedarnath will be done in this temple.

After Yamunotri closes the valve, mother Yamuna’s doli reaches Kharsali. Kharsali is called Maa Yamuna’s mother. Yamunaji dwells here on cold days. Winter worship of Mother is worshiped by devotees only in Kharsali. This year, about a thousand people have visited Yamunotri Dham. 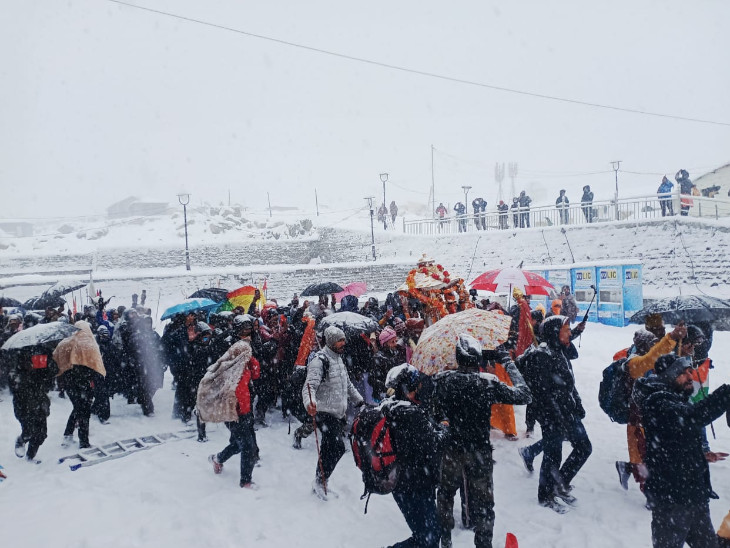 A large number of devotees visited the temple before the kapat closed.

Shutdown position of other temples

The doors of Badrinath Dham will be closed on November 19 at 3.35 pm. The second Kedar is closed at 7 am on the 19th of Madhyameshwar. Madhyameshwar fair will be held on 22nd. The courts of the third Kedar Tungnath have also closed.

After the water tragedy in Kedarnath in 2013, the number of devotees here had reduced drastically. In 2014, only 40 thousand people arrived for darshan. In 2015, this number had increased to 1.54 lakhs. 3.30 lakhs in 2016, 4.71 lakhs in 2017 and 7.32 lakhs of devotees reached Kedarnath in 2018. This figure reached its record level in 2019. This year 9.50 lakh people came here. Kedarnath had its doors open in 2020 only during the Corona period. But, till August, the darshans were completely closed. Due to this, only 1.35 lakh people reached here in three months, out of which the number of local people was also high.

Kedarnath houses open every year in the month of Vaishakh

Kedarnath is the third of the 4 dhams of Uttarakhand. It is the eleventh temple at the highest height of the 12 Jyotirlingas. The temple is at an altitude of 3,581 meters and about 16 km from Gaurikund. Every year the date of opening of the doors of the temple is fixed on Mahashivaratri. Usually in the month of Vaishakh, i.e. March-April, the temple is opened to devotees. After this, the darshan and the yatra last for about 6 months. In the month of Kartik, i.e. in October-November, the doors are closed again. 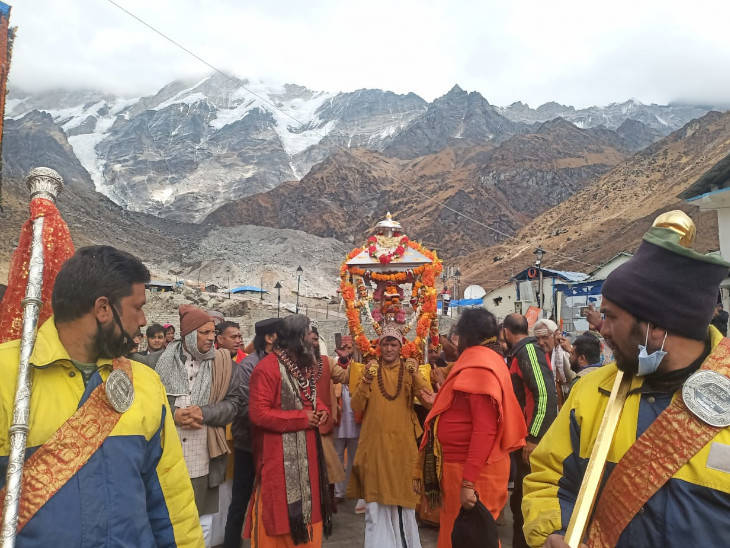 In winter, the worship of Kedarnath will be in Ukhimath. 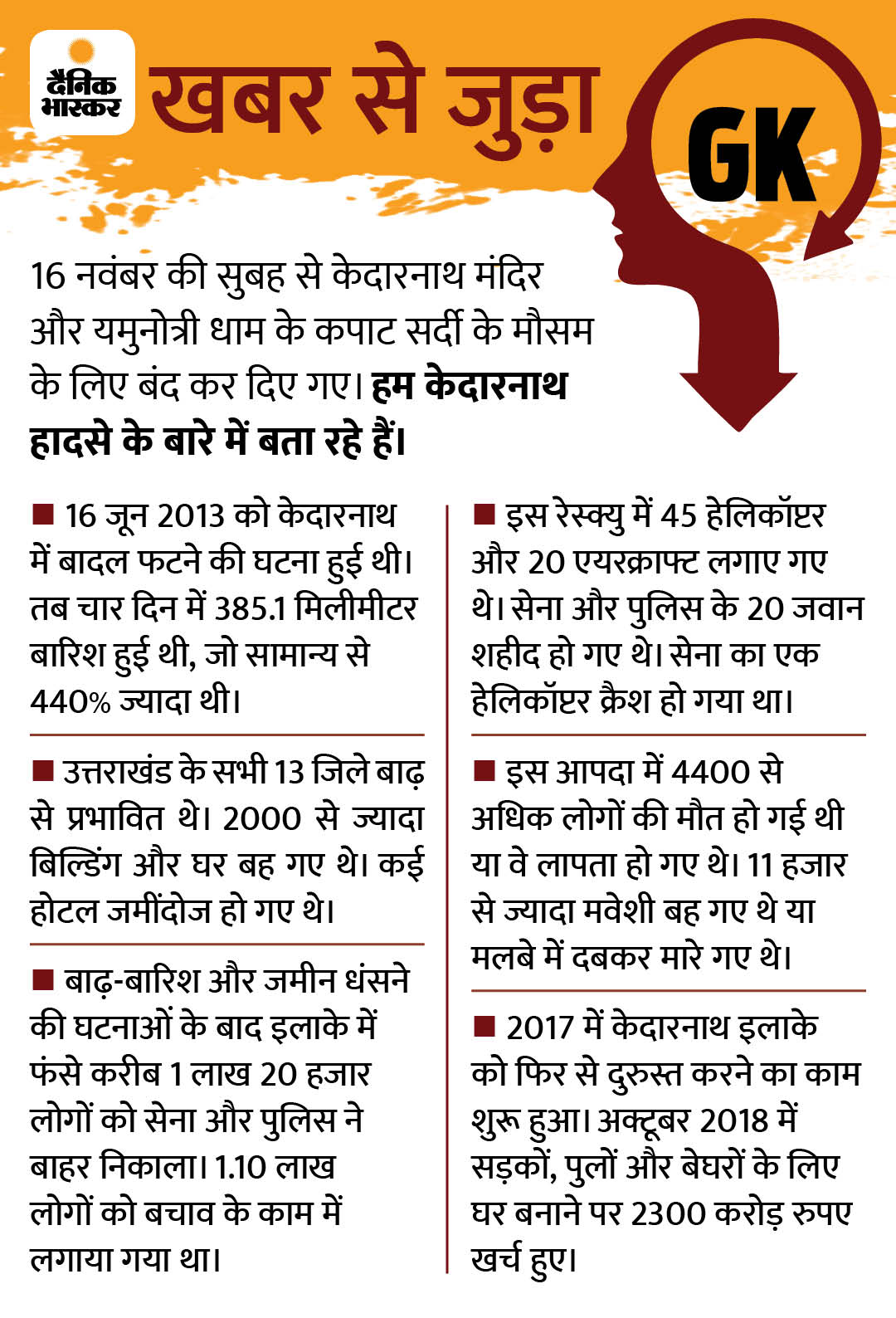