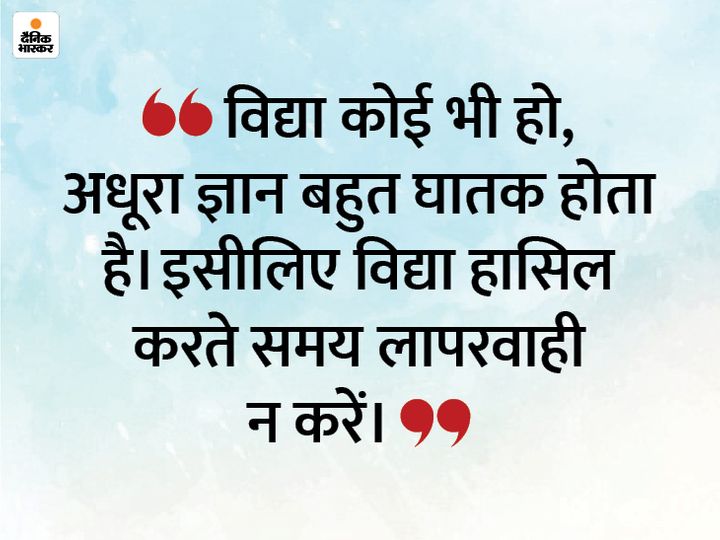 story- In the Mahabharata, when Dronacharya was teaching Brahmastra to Arjuna and Ashwatthama, Ashwathama learned only how to operate Brahmastra, he did not understand the method of returning it. He was negligent in this discipline. This effect was seen in Mahabharata war.

When the war between the Kauravas and the Pandavas was underway, Duryodhana made Ashwatthama the commander of the Kaurava army before he died. Ashwathama single-handedly killed many of the warriors, including the five sons of the Pandavas, the Pandava commander Dhritadhumna and Shikhandi.

After this Arjun and Ashwathama came face to face. Both were disciples of Dronacharya. He was also proficient in warfare. Ashwathama tried hard to defeat Arjuna, but he did not succeed. Due to this, his anger was increasing. In anger, Ashwathama left Brahmastra. Arjuna also answered this from Brahmastra itself.

Two Brahmastra went together, if both of them collided, the whole earth would have ended. Ved Vyas reached there to save the earth. He explained to Arjuna and Ashwatthama, asking him to take back Brahmastra.

Ashwatthama said, I do not know how to return it, but I will change its direction, send it to where the clan of Pandavas is to proceed. Having said this, Ashwatthama turned Brahmastra towards the womb of Uttara, Abhimanyu’s wife. At that time Uttara was pregnant and Parikshit, the last child of the lineage of Pandavas, was in her womb. Parikshit died in the womb due to Brahmastra’s blows.

Then Lord Krishna raised Parikshit alive. Krishna punished Ashwatthama by killing the unborn child. Ashwatthama had a gem on his forehead from birth, due to which he was immortal. Lord Krishna took out the gem and cursed him to keep wandering till the end of Kali Yuga.