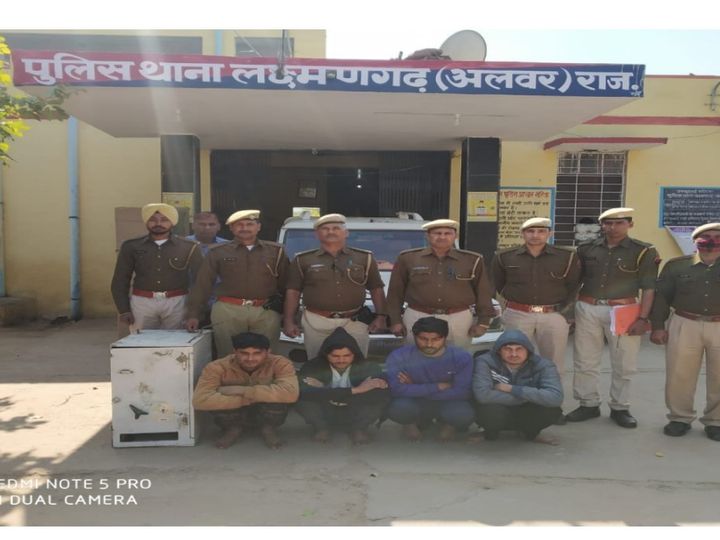 The police just caught these four miscreants. The search for whose other companions continues.

The speed of ATM uprooting through miscreants in Alwar district is 15 to 20 minutes. On Saturday, the Alwar Superintendent of Police has disclosed the inter-state ATM robbery in connection with the overthrow of the ATM. The most shocking thing in this revelation is that the miscreants used to hide themselves in the container including their car after the ATM plunder. So that the police do not know anything. Hundreds of kilometers away, the miscreants escaped by taking the car out of the container. Now the police have caught four such miscreants. Apart from Alwar, they have also committed crimes in Maharashtra and Madhya Pradesh. SP Tejaswani Gautam said that police have reached this gang after several incessant incidents of uprooting in the district. It has been revealed from the four arrested gang members that they used to carry out the incidents of ATM uprooting in just 15 to 20 minutes. It also takes almost the same time to cut an ATM from a gas cutter. The Alwar police have arrested four gang members. The search for the rest continues. From which a broken ATM, two cars and cash of two lakh two thousand rupees have also been recovered.

Where did this gang loot ATM
During interrogation of the police, it has been found that the gang has confessed to looting the atem from about six places in Maharashtra’s Pune and Madhya Pradesh including Bahadarpur, Neemrana, Maujpur. Police said that the interrogation of the miscreants is still going on. Help has also been taken from the police of other states. So that their other crimes can be detected.

Carry out such an incident
The police said that the miscreants used to carry a small car, gas cutter, jammer, dongle and other necessary items along with them. Before making plans to rob ATMs, they used to rake. Then, at night, two men would wear a mask and enter the room at the ATM. A crook would spray on the camera. The second one cut the wire of the siren. After this, the ATM would be tied and pulled using Hydra machine. Then the ATM would be packed in the car and taken to the deserted place. There with the help of a gas cutter, they would cut the ATM. After that, we would have divided the amount. ATM parts are thrown at nearby river rivulets or isolated places.

Shocking thing: the crooks used to hide in the container with the car
CO Laxmangarh Ashok said that the most shocking thing in this whole revelation is that after the robbery robbery, large containers used to hide along with the car. The car manufacturers used to send the vehicles of the companies to the dealers, where the miscreants used to carry out the ATM uprooting around that. After robbing ATMs, they used to hide in containers including cars. Meaning container drivers are also involved in such loot. So that they can cross over by dodging the police.
Hold these four people
SP said that Anwar son Amli resident Bhango police station Tawadu, Mustafa son Mahmud resident Macharauli Nuh Haryana, Talim son Aalim resident Dauhaj Haryana, Irsad son Khurshid resident Gopalgarh Bharatpur have been arrested. Information is also being collected against those cases registered in other police stations. They have seized a lot of goods including two cars. The investigation is on.