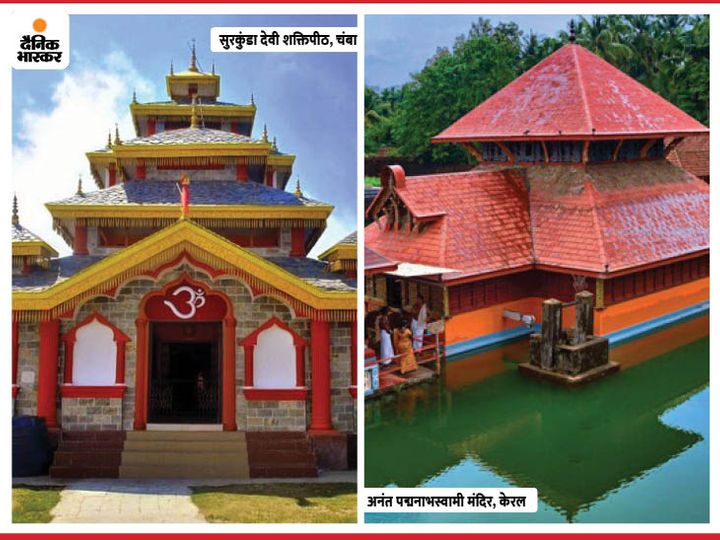 The sacred festival of Lord Dhanvantari is celebrated on Dhanteras. This time this festival will be celebrated on 12 November. Dhanvantari, the father of Ayurveda, is considered to be the incarnation of Lord Vishnu. On this day, medicines are also worshiped along with them. There are 2 temples in the two corners of the country, north and south, which are connected with medicines. There is a temple of Lord Vishnu in Kerala in the southern corner of the country where idols are made of medicines. At the same time, a Shaktipeeth of Uttarakhand where a curative medicine is found in the form of Prasad. Both these temples are unique in themselves.

Anant Padmanabhaswamy Temple, Kerala
This temple is in Anantapur village in Kasargod district. Which is situated in the middle of the lake spread over 302 sq km, so it is also called Lake Temple. This temple is about 1100 years old. All the sculptures present here are not made of any metal or stone, but rather, they are made from a mixture of more than 70 special medicines, which are called Kadusharkara Yogam.

Surkanda Devi Shaktipeeth, Chamba
Surkanda Mata Temple is reached on foot on the Mussoorie road in Uttarakhand by climbing about one and a half km from Kadukkhal town. This shrine is dedicated to Goddess Durga. Surkanda Devi Temple is also considered one of the 51 Shakti Peethas. The temple’s priest Ramesh Prasad Lekhwar says that the head of Goddess Sati fell on Mount Surkut here. Hence it is called Surkanda Temple. This temple has a statue of the destroyer goddess Kalika. The mention of this shrine is also found in Skandpuran. This temple is right on the top of the mountain and is surrounded by dense forests.