Here you can see the face of Goddess

In the Srimad Bhagavad Purana and Vishnu Purana, the mention of Goddess Saraswati as a river appears here.

Maa Saraswati has a different place in the Vedas, in the scriptures. But today we are going to tell you about the place where Maa Saraswati first appeared. This place is present only in Uttarakhand, the Devbhoomi of the country. Actually, after going three kilometers ahead of Badrinath temple in Chamoli, you will see the origin of the Saraswati river. It is believed that this is the place where Maa Saraswati first appeared. The most surprising thing here is that the stream of river Saraswati also flows here as a face shape.

Apart from this, the birth anniversary of Gyanadayini and Vidyadayini Maa Saraswati is also celebrated on Basant Panchami. According to mythological beliefs, on this day Maa Saraswati was revealed. On this day, the environment around it becomes yellow. Mustard flowers are strewn in the field and mother Saraswati is worshiped only by wearing yellow clothes. By the grace of Mother Saraswati, all the devotees gain knowledge, intelligence and strength. Today we will also tell you about the famous temples of Maa Saraswati located in India and abroad.

Actually, the stream of Saraswati river forms an appearance in Uttarakhand. It is also called the mouth of Mother Saraswati. You will only see such a wonderful view from ‘Bhima Pul’ in Mana village of Uttarakhand. When sunlight falls on the stream of the river, the seven colors of Indra Dhanush are seen in front.

It is said that these are the seven notes which are in the strings of Veena of Goddess Saraswati. From Bhimpul, Saraswati river can be seen flowing inside the surface. After this the river disappears. The Mahabharata also describes the invisibility of the river Saraswati. Even today, in many places of Haryana and Rajasthan, there is talk of Saraswati flowing within the surface of the river. In Rajasthan, the Saraswati river was even built to bring it to the earth. But seldom can anyone know and understand the real secret of this river.

It is believed that the Pandavas traveled to heaven from this divine place of Uttarakhand. Not only this, Maharishi Ved Vyas Ji composed Mahabharata at this place. There is also a divine temple of Maa Saraswati at this place. It is said that Goddess Saraswati had to appear here as a river due to the dispute between Ganga, Yamuna and Saraswati. This story is also mentioned in the Srimad Bhagavad Purana and Vishnu Purana. 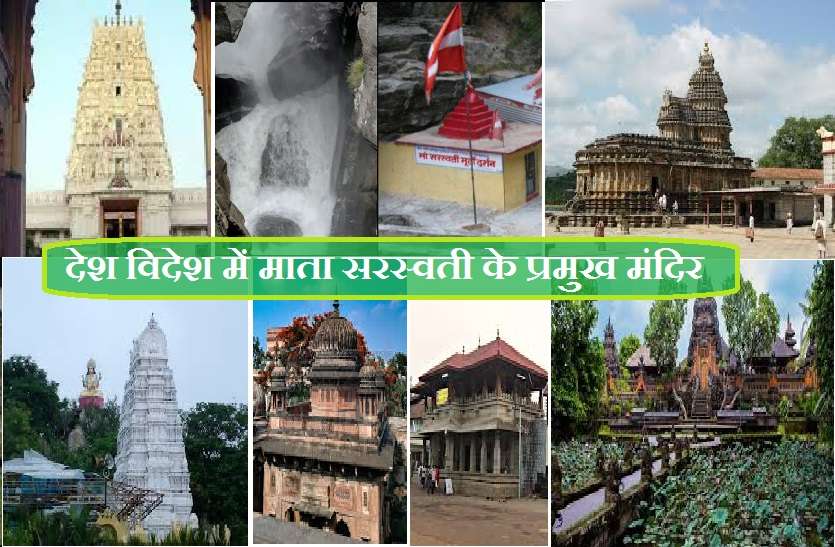 1. Saraswati Udgam Mandir Mana Village Uttarakhand
There is a small temple of Maa Saraswati on the originating bank of river Saraswati, 3 kilometers from Badrinath Dham in Uttarakhand. It is believed that for the first time in the world, the goddess Saraswati appeared at this place. It was at this place that Vyasji worshiped Goddess Saraswati and composed the Mahabharata and other Puranas. Here in the sunlight above the stream of Saraswati, there are colorful rays which are said to be the strings of the veena of Saraswati.

3. Shardamba Temple Sringeri Karnataka …
The first of the four monasteries established by Adiguru Shankaracharya is the Riggeri Sharda Peeth which was established in the eighth century. This Peeth is known as Shardamba Temple. This temple first had an idol of Goddess Saraswati made of sandalwood which was installed by Adiguru Shankaracharya. This idol was replaced in the 14th century and a gold idol was installed in its place.

In addition to the Goddess Saraswati in this temple, there is also a Shivalinga of Rhinestone, which is said to have been given by Lord Shiva himself to Shankaracharya. On the day of Magh Shukla Saptami i.e. Basant Panchami Saraswati Puja, Mother is worshiped in a grand manner. Special poojas are also organized on Navratri and many other occasions.

4. Sharda Temple of Maihar, Madhya Pradesh …
On the Trikuta hill, Satna district of Madhya Pradesh, there is a temple of Goddess Sharda, the martial form of Maa Durga. There is a belief about this temple that two Chiranjeevi named Alha and Udal have been worshiping the Goddess everyday for many years.

5. Sri Gyan Saraswati Temple, Andhra Pradesh …
It is said that after the ceasefire of Mahabharata, Ved Vyas did penance of Goddess Saraswati at this place. Due to which the mother Saraswati appeared and appeared to him. At the behest of the goddess, he took three handfuls of sand in three places, the miraculous sand turned into Saraswati, Lakshmi and Kali idols. Even today, the three Goddesses sit here and do welfare of their devotees. People come here to visit from every corner of India. Darshan of Mata has special significance here on Basant Panchami. It is said that the darkness of ignorance is erased by his philosophy.

7. Mookambika Temple, Kerala …
The famous Kerala temple known as Dakshin Mookambika is dedicated to Goddess Saraswati. Located in Ernakulam district, this temple houses the idols of Lord Ganesha, Vishnu, Hanuman and Yakshi, besides the main goddess Saraswati. According to the legend, the king here was a devotee of Goddess Mookambika and visited the Kollur temple in Mangalore every year to see the goddess. When the king got old, he started having trouble visiting the temple every year. Seeing the devotion of the devotee’s faith, Goddess Mookambika came in the king’s dream and asked the king to get her temple built and see her here. Here the idol of Goddess Saraswati is seated facing east. The 10-day festival in the temple is celebrated in the months of January and February. The Vidyabharam festival is celebrated with great pomp here in which the Vidyabharam rites of children are performed.

8. Saraswati Temple in Bali …
Apart from India, Mother Saraswati is also specially worshiped abroad. The temple of Maa Saraswati is also located in beautiful country Bali. Here the lotus is blooming in the lake of holy water around the temple. The people here have special faith towards Maa Saraswati and celebrate this festival with a special event on the occasion of Basant Panchami.