Blood comes out from Sheela every year…

In this way, many miracles are seen in many temples of the country. However, Uttarakhand, the land of the Devas, is filled with many mysteries of the gods. Amidst these miracles and Dev mysteries, the famous Shakti Siddhpeeth Shree Kalimath Temple is situated on the banks of the Saraswati River in the Himalayas surrounded by the peaks of Kedarnath in Rudraprayag district of Devbhoomi, Uttarakhand. This temple is situated at an altitude of 1463 meters from the sea level.

Footprints of Goddess Kali …
This temple of Maa Kali is described in 62 chapters of Kedarnath under Skandpuran. Situated at a steep elevation of 8 km from the Kalimath temple, the divine rock is known as ‘Kali Shila’, where the footprints of Goddess Kali are present and it is believed about Kalishila that Mother Durga has given birth to Shumbha, Nishumbha and Raktibij To kill the demon, she was revealed as a 12-year-old girl in Kalishila.

Kalishila has 64 instruments of the Goddess, Mother Durga got power from these 64 instruments. It is said that at this place 64 Yogania keeps visiting. It is believed that at this place, Goddesses, who were troubled by Shumbha-Nishumbha demons, did penance of Mother Bhagwati. Then the mother appeared and hearing about the terror of the Asuras, the mother’s body turned black with anger and they took the form of a giant and killed both the demons in the war.

There is no idol in this temple …
The most interesting thing about the Kalimath temple is that there is no idol in it, the devotees worship the Kundi inside the temple, this tank is covered with the Rajatpat Sri Yantra. This Kund is opened only on the day of Ashta Navami in Sharde Navaratri throughout the year and the divine goddess is taken out and worship is also done only at midnight, then only the chief priests are present. 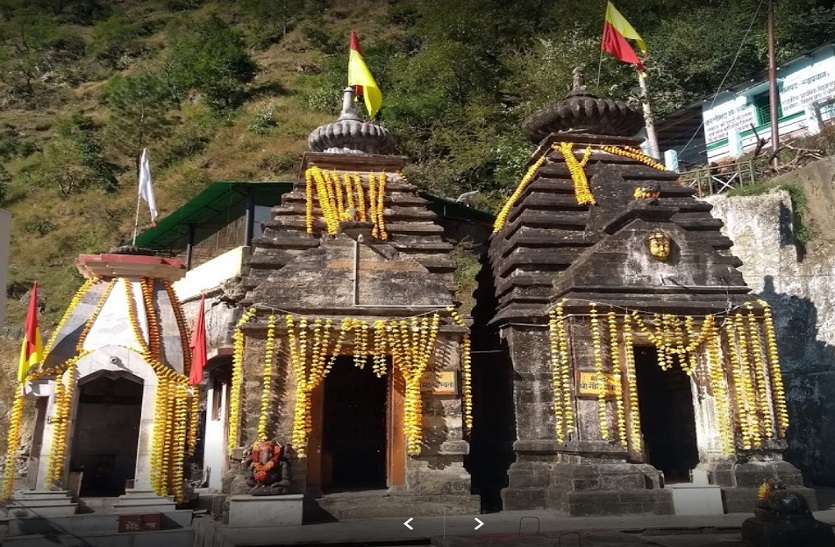 According to Durgasaptashati’s pathology mystery …
The construction of these temples is done with the same legislation as stated in the Vaikriti mystery of Durgasaptashati i.e. Mahalakshmi in the middle, Mahakali in the south and Mahasaraswati should be worshiped in the left part. According to the local residents, it is also a legend that Mata Sati took a second birth as Parvati in this rock.

The village Kalimath was originally and still is known as the village ‘Kavaltha’. It is said that the place of meditation of Kalidas, the unique author of Indian history, has also been the same. It was at this divine place that Kalidas pleased his mother Kali and received scholarship.
After this, with the blessings of Virajit Maa Kali in the Kalimath temple, he has written many books, out of which the only poetic text written in Sanskrit, “Meghdoot” which is world famous. Inscriptions have been installed here on behalf of a king named “Rudrashul”, written in the Bahmi script. There is a complete description of this temple in these inscriptions as well.

Blood comes out from Sheela every year…
It is believed about Kalishila situated on the banks of the river of the temple that the blood on which the demon Raktabeej was killed by mother Kali in Kalimath, every year on the day of Dussehra, blood also comes out.

It is also believed that Mother Kali did not calm down after slaughtering Shimbh, Nishumbha and Raktabija, then Lord Shiva lay under the feet of Mother Kali, as soon as Mother Kali stepped foot in Lord Shiva’s chest, then Mother Kali’s anger subsided and she disappeared in this pool, it is believed that mother Kali is absorbed in this tank and Shiv Shakti is also installed in the Kalimath temple.

Every year at Kalimath temple in Navaratri, there is a crowd of devotees and devotees from far and wide arrive to seek the blessings of Mother Kali. In this Siddhapeeth, the devotees offer raw coconut and material related to the Goddess’s makeup, which includes bangles, bindi, small mirror, comb, ribbon, chunariya, to worship the mother. Kalimath temple is the only place in the country where different temples of Maa Kali, Maa Saraswati and Maa Lakshmi are built.