In India, it is common for temples to be found everywhere, but have you ever wondered why the Mother Goddess is called ‘Mother of the Mountains’. And also what is the secret of the Mata temples being on the mountains? After all, what is there in the mountains, which is not there in other places. In fact, soon Chaitra Navratri 2021 is about to begin, in such a situation, today we are telling you about many famous temples of Goddess Mata and some special things related to Mother.

Regarding the presence of Mata temples on the mountains, experts say that these places, ie the mountains were known as cultivation centers from earlier times. Earlier, sages and sages attained siddhi by doing penance for years at such places. Actually, there is solitude on the mountains. Solitude has given importance to the mountains for the Goddess temples.

The mind easily converges on the mountains. Silence, meditation and chanting etc. require solitude and there can be no better place than the mountains for this. Apart from this, the movement of humans on the hill areas is less, due to which the natural beauty of the place is able to survive in its true form.

MUST READ : One such goddess who is wearing all four dhams 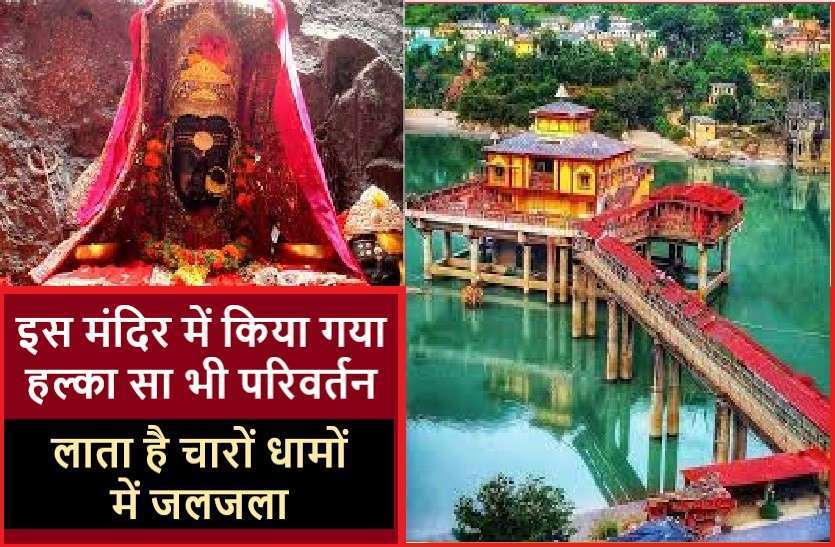 There is also a psychological fact that beauty imparts vitality and freshness to a human being. Sometimes doctors also advise people to spend a few days in the hilly area. It is also believed that a person’s health is better at higher altitudes than in lower places.

Staying on a high position continuously ends the diseases on the ground. At the same time, the development of religious and spiritual feelings of human beings in the hill places is quick.

At the same time, the Goddess had descended to destroy the demons. In such a situation, it is also believed that the demons used to come from the plains and Devi would kill them after seeing them from the mountains. That is why the Dev places are also on the high mountains.

MUST READ : Famous Devi Temple of the country, where miracles still occur today 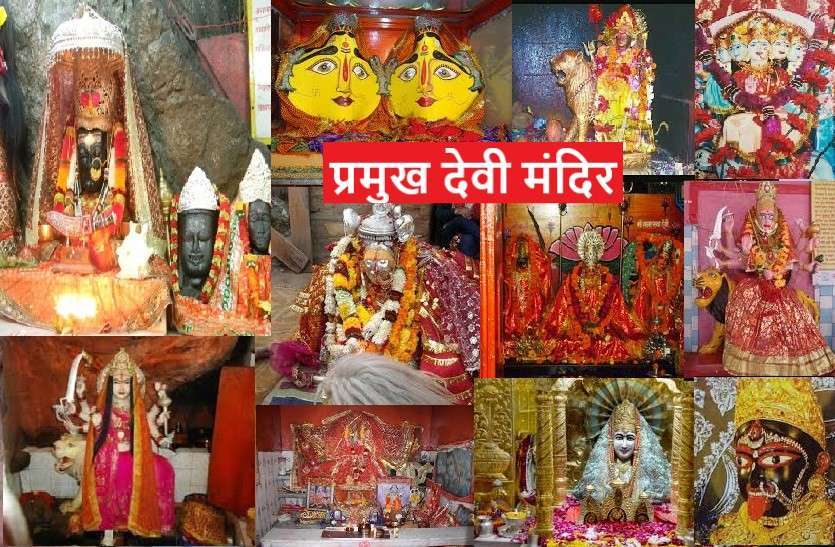 Some special Devi temples of the country …

1. Mata Vaishno Devi –
Vaishno Devi is also known as Mata Rani and Vaishnavi. This temple is on the Trikuta hills in Katra Nagar in Jammu district of Jammu and Kashmir. This temple is at an altitude of 5,200 feet and about 12 kilometers from Katra. Every year millions of pilgrims visit the temple. There are many stories about Mata Vaishno Devi. According to a famous ancient belief, pleased with the devotion of Sridhar, a devotee of Mother Vaishno, the mother kept her shame and gave proof of her existence to the world.

2. Poornagiri Devi Temple –
This temple is located at an altitude of 5500 feet on the Annapurna peak in Tanakpur, Devbhoomi Uttarakhand, India. It is one of the 108 Siddha Peethas. This place is considered to be the back of Mahakali. It is said that the navel of Sati, the daughter of Daksha Prajapati and the Ardhangini Sati of Shiva, fell here from the Vishnu Chakra. Faithful devotees visit this Shakti Peetha every year and also come here after suffering. “Maa Vaishno Devi” Like the court of Jammu, the Purnagiri court attracts millions of people every year. 3. Naina Devi Temple –
This temple is in the Nainital district of Devbhoomi Uttarakhand. Naina Devi Temple is located on the northern bank of Naini Lake. This temple was destroyed by a landslide in 1880. It was later rebuilt. The Shakti form of Sati is worshiped here. The temple has two eyes which depict Naina Devi.

About Naini Lake, it is believed that when Shiva was going to Mount Kailash with the dead body of Sati, Shaktipeeths were established wherever his body parts fell. Goddess Sati’s eyes fell on Naini Lake. Inspired by this, this temple has been established.

4. Haat Kali Temple –
There is a temple of Mahakali here, named Haat Kali, amidst the beauty of Gangolihat of Pithoragarh, Devbhoomi, Uttarakhand.

It is believed that Mahakali used to call Lord Vishnu and Lord Mahadev by climbing a cedar tree located here.

It is said that even after killing all the fierce Shishu Nishumbh and other demons including Mahishasura and Chandmund, this wretched form of Mahakali did not calm down and this form created a Tandava by taking the form of Mahavikharal Dhabhakati Mahabhayanaka flame.

Meanwhile, amidst the beautiful beauty of Gangolihat in Pithoragarh, Mahakali, wearing a fierce form of Mahakala, climbed into a cedar tree and started voicing Jagannath (Lord Vishnu) and Bhuvaneshwar Nath (Lord Shiva). 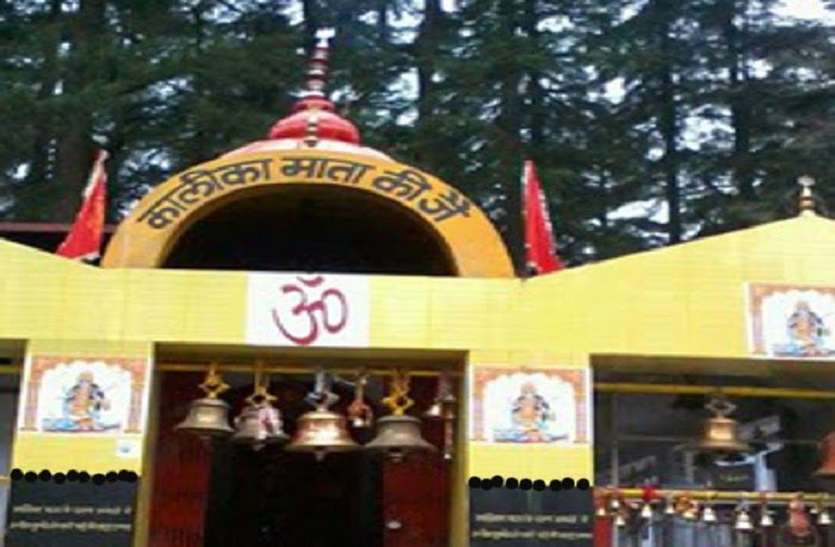 People say that this voice was heard almost everyday till long ago, but the person who had this voice in his ear, would have reached Yamlok by morning.

According to the belief, the Gangavali region of Uttarakhand, which is the most amazing region of the Himalayas. Here the mother Kali is inhabited, it is also the center of Mother Kali’s resting Leela while always awake. Today Adi Shakti Mahakali is a temple here. Where Mahakali’s bed is placed near Shakti after Maharati, the mother of Mahavidyas, and in the morning the bed indicates that the Sakshatika Kalika has gone to rest here, because the bed is covered with solutes.

Mansa Devi along with Chandi Devi and Maya Devi of Haridwar are also considered prominent among the Siddha Peethas. Mansa studied the Vedas by performing rigorous penance of Lord Shankar and received Krishna Mantra, which is called Kalpataru Mantra. After this, the goddess meditated in Pushkar for many ages. Lord Krishna gave a boon by giving darshan that you will be worshiped in the three worlds.

6. Jwala Devi Temple –
This temple is on a hill 30 km away from the Kangda Valley of Himachal Pradesh. This temple is included in 51 Shakti Peethas. They are also known as Joti Wali Temple and Nagarkot. The credit of finding the Jwalamukhi temple goes to the Pandavas. This sacred religious site was discovered by them. Mother Sati’s tongue fell on this place.

In this temple, darshan of Mata is done in the form of light. Near the Jwalamukhi temple is the temple of Baba Gora Nath. Which is known as Gorakh Dibbi. The primary construction of this temple was done by King Bhumi Chand. Later in 1835, Maharaja Ranjit Singh and Raja Sansarchand built this temple completely. There are nine Jyothi Jyotis of Mata inside the temple, which are known as Mahakali, Annapurna, Chandi, Hinglaj, Vindhyavasani, Mahalakshmi, Saraswati, Ambika, Anji Devi.

7. Maihar Mata Temple –
Regarding the Maihar Mata temple in Satna district of Madhya Pradesh, devotees believe that stopping here between 2 and 5 o’clock can result in death? Devotees have to climb 1,063 steps for darshan. The temple also has an ancient inscription. Here sits an ancient idol of Lord Narsingh, which was installed in the year 502. At the same time, two great warriors visit Alha and Udal and offer their bravery and greatness. Alha and Udal were very devoted devotees of the mother. He also fought Prithviraj Chauhan in 1182.

The temple of Maa Sharda is closed between 2 pm and 5 pm. It is believed that both these brothers come to visit the mother during this period. Both brothers visit the mother and worship them as well as worship them. Therefore, no one stays here between 2 to 5 o’clock at night. Devotees believe that anyone who stubbornly tries to stay here may die.

8. Salakanpur Devi Temple –
In Sehore Salkanpur of Madhya Pradesh, Viraji’s mother takes all the grief of the devotees by giving Vijayasana darshan. Devotees reach the court of Mother after traveling 14 hundred stairs. In Salkanpur, this self-proclaimed idol of Viraji Siddheshwari Maa Vijayasan is that of Mata Parvati, who is seated with Lord Ganesha in her lap with an eagerness.

Mahalakshmi, Mahasaraswati and Lord Bhairava are also present in this temple. According to the Puranas, Goddess Vijayasan is the incarnation of Mata Parvati, who, on the insistence of the gods, killed the demon named Raktabija and protected the entire creation. Goddess Vijayasan is worshiped by many devotees as the total goddess.

About two and a half thousand years ago the city of Kamakhya was ruled by King Veerasen. He was a childless child. He wished Bhagwati Durga and Shiva to wish children. As a result, he received the son Ratna within a year. Veersen named his son Madansen. To express gratitude to Maa Bhagwati and Lord Shiva, the king built the temple of Maa Bamleshwari.

10. Pavagadh Shaktipeeth –
This famous temple of Kali Mata is one of the Shaktipeeths. Shaktipeeth is said to be the places of worship where Sati’s limbs fell. Mother’s chest fell in Pavagadh. Similarly, there is a story behind the name of Pavagadh. It is said that climbing this inaccessible mountain was an almost impossible task.

Due to being surrounded by trenches all around, the velocity of wind was also different, so it was called Pavagadh i.e. a place where the wind is inhabited. The temple is located near the ancient capital of Gujarat, Champaran, about 50 km from Vadodara city. The Pavagadh temple is situated on the top of a high hill. The climb of this inaccessible temple built at a very high altitude is extremely difficult.