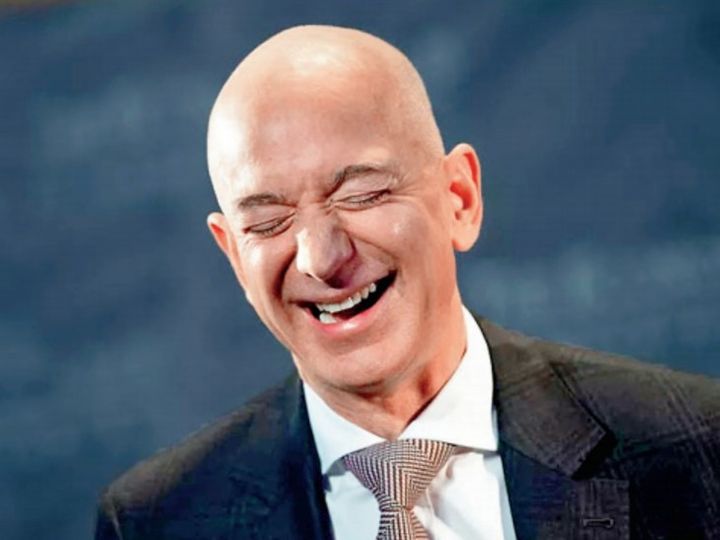 Bezos laughs a lot, he has many stories of laughter. He explains that many times people do not even watch movies with him because of laughing.

The world’s richest man, 57-year-old Jeff Bezos, is now changing his role to Amazon. On Tuesday, he announced that he would step down as CEO and take over as executive chairman. For 25 years, CEO Bezos has wanted to focus on his company Blue Origin, Earth Fund and The Washington Post newspaper in space programs.

According to Business Insider, Bezos earned Rs 1.81 lakh every second in 2020. Those who know Bezos believe that he is always ahead of time. In 1982 in high school, Bezos said – Earth is limited, if the world’s population and economy continues to grow, then the only way to go to space will be left.

In 2000, Bezos founded Blue Origin. Two years later, Elon Musk founded Space X, but in these years, Blue Origin has not done much. Bezos is believed to be paying attention to this given the possibilities in space. Blue Origin is beginning to send tourists to space from April this year. Bezos wants to colonize the moon.

How is the routine: Get up early in the morning, first meeting time at 10 o’clock

In an interview at The Economic Club of Washington DC in 2018, Bezos described his routine. Bezos sleep early at night, so that he can get up early in the morning. Never compromise with 8 hours of sleep to maintain energy at work. Bezos says he is among those who spend the morning comfortably.

Drink coffee leisurely, read the newspaper, have breakfast with the children. Bezos holds their first meeting at 10 pm. Meetings with high IQ are settled before lunch. After lunch, they have light meetings only. He explains that if there is an important meeting in the evening, then fix it for the next day at 10 o’clock.

How do business: years suffered losses, 20-year-old failed product is most successful today

Amazon was called the Bezos Lab, where there were experiments related to customer behavior. Every customer’s behavior was recorded and tracked. Hired Chief Scientist Andreas Wagand to study behavior. When Amazon was listed on the market, it wrote to investors to see profits in the long run.

Bezos spent most of the money in eliminating competitors. The company was in loss for a long time. Amazon launched the phone 20 years ago under the name Fire. The phone failed with voice assistant and 4 cameras, but Alexa, using the same voice assistant technology, is one of Amazon’s most successful products today.

How to start: studied 20 products, named after the amazon river

Bezos stayed at Wall Street investment firm Dee Shaw & Co., becoming Vice President there in eight years. In 1994 there was no e-commerce. Bezos listed 20 products that had a good market but were not online. He went to the American Bookseller Convention to understand the trade of books. Then one day told his boss the idea of ​​opening an online book store.

Bezos quit his job and started Amazon on July 5, 1994 from his father’s garage. Initially named Cadabra. Bezos wanted his business name to show greatness, so the name was changed to Amazon after the Amazon River.

How Bezos is the Boss: Prohibition of Presentation in Meetings, See Reasoning of Employees

Bezos has banned power point presentations in meetings. At the beginning of the meeting, 30 minutes everyone reads the relevant document. He says that this leads to meaningful discussion. Bezos wanted every person to enter the company to be nimble. So they would check the SAT score to check the reasoning of the employees.

He placed customers at the top of Amazon’s core value. Bezos keeps his email [email protected] public. Most mails with customer complaints are read and sent to the concerned department. Bezos leaves a chair empty during a meeting at the Seattle office. He argues that this is our client’s chair.