On this day, keeping the silence and not uttering harsh words, attains the title of Muni

Amavasya falling in the month of Magha is also a festival of ancestors.

Amavasya falling in the month of Magha is also known as Mauni Amavasya or Magha Amavasya. Mauni Amavasya is very important in Hinduism. In this way, this year, Mauni Amavasya is falling on 11 February 2021. On this day the Peepal tree is worshiped along with Lord Vishnu. On the day of Mauni Amavasya, keeping mute and not uttering harsh words, one attains Muni post.

Bathing in the holy river or kund on the day of Mauni Amavasya is considered auspicious. According to religious belief, on the day of Magha Amavasya, the gods and goddesses dwell on the Sangat coast and the Ganges. Mauni Amavasya is very important in Hinduism. It is not only seen as Amavasya but also as a festival of ancestors. On this day, charity, chanting, penance and bathing are also important. 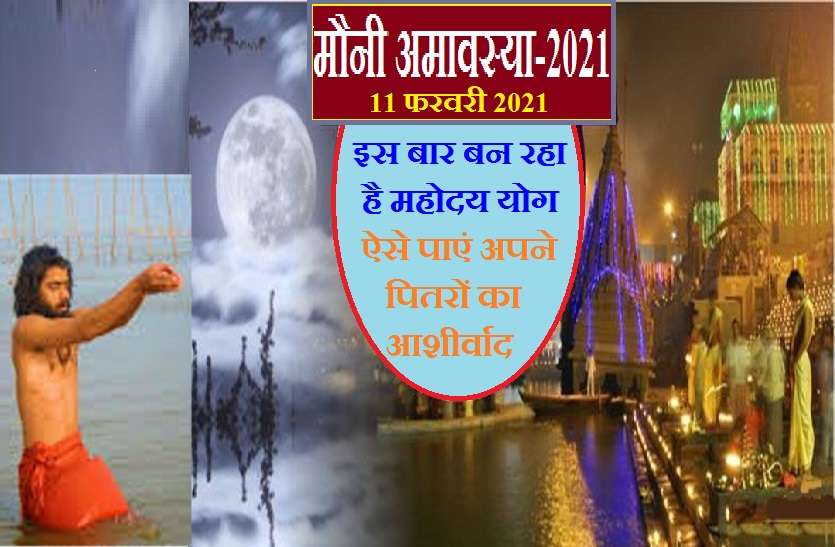 It is believed that if a person performs charity work on this day, it is directly received by our ancestors. This Amavasya falls in the month of Magha, in such a situation it is called Maghi Amavasya. A fast is observed on this day. Also the blessings of fathers are also taken.

On the day of Mauni Amavasya 2021, planetary formation of planets-
On the day of Mauni Amavasya, the moon and six planets in Shravan Nakshatra are forming Mahasanayoga in Capricorn. This auspicious coincidence is called sir yoga. It is believed that by taking a dip in Kumbh and worshiping fathers in Sir Yoga, you get good fruits. On this Amavasya, there is a law to worship both Lord Vishnu and Shiva, it is believed that this opens the way to attain wealth and salvation.

According to the belief, if some remedies are taken on this day, then the Vastu defects are removed from the person’s home. So let’s know about these measures …

2. This year it is on Amavasya Thursday. It would be good if ancestors meditate on wearing yellow clothes on this day. This will make your ancestors happy. Add turmeric to the water and then apply it on the main gate. Clean the house wall. This has the effect of positivity in the home.

3. If donated on this day, the souls of the ancestors get fulfillment. On this day, distribute food among the poor. Apart from this, apply the penny and copper coin in red ribbon and hang it at the main gate. This brings positive energy.

4. If on this day worship Vishnu ji and install the Sriyantra. If you do not have a Sriyantra, then take a white paper and make a Sriyantra with a red pen on it. Install it with Lakshmi Mata. There is no shortage of money in the house.

5. On the day of Mauni Amavasya, spray Ganga water throughout the house. Also smoke camphor, sandalwood and frankincense. This leads to a positive flow in the house.

Mouni Amavasya fasting rules
1. On the day of Mauni Amavasya, one should take a bath in the bathing river, lake or holy pool. Arghya should be offered to the sun god after bathing.
2. Keeping fast on this day should remain as far as possible. Must provide food to poor and hungry person.
3. Donate food for cow in cereals, clothes, sesame, amla, blanket, bed, ghee and cow slaughter.
4. If you can also donate cow, gold donation or land on Amavasya.
5. Like every Amavasya, fathers should be remembered on Magh Amavasya as well. On this day, they receive salvation by offering ancestors.

Do this after bathing in Ganges
Donating sesame, sesame oil laddus, sesame oil, amla, blanket, clothes, anjan, mirrors, full and milk cows will be more fruitful after bathing the Ganges on Mauni Amavasya.

On any Amavasya, there is a law to perform tarpan, pindadan etc. for the fulfillment of the ancestors. By doing this the ancestors are happy and they bless happiness, prosperity and family growth.

According to religious beliefs, on this day, offering of ancestors on this day gives freedom from Pitra dosha. On the occasion of Mauni Amavasya, the fruits of charity and virtue are given a hundred times more. It is said that on this day the water of the Ganges is similar to that of nectar. The Ganga bath performed on Mauni Amavasya provides amazing virtue.