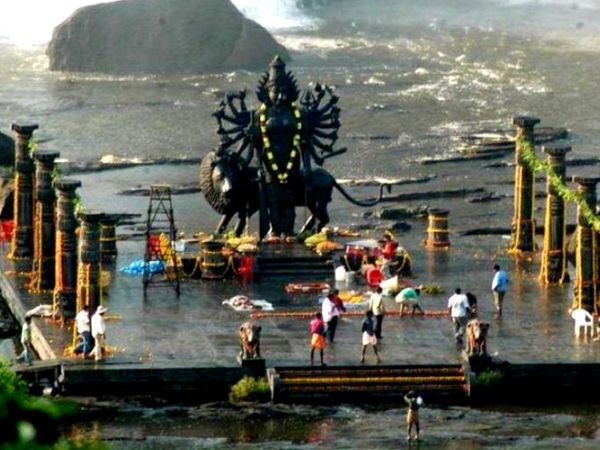 The Pisarikkal Bhagavathi temple in Chalakudy, Kerala is about a thousand years old. This shrine is included in the list of 108 Durga temples in Kerala. The temple consists of two main statues of Vanadurga and Bhagwati. Usually all devotees call it Bhadrakali Amman. This temple is completely surrounded by divine aura everywhere. Seeing the idol of Goddess Durga placed under a falling waterfall from the hill, it seems that nature is offering water to the Goddess. Devotees come to this temple of Shakti with a desire for prosperity, health, knowledge and peace.

Special worship is done on Navratri
The main idol has a conch and a chakra in its hand. Apart from the statue of Amman, the idol of Lord Shiva and Ganapati is also installed here. The annual festival Meenam is celebrated in a grand manner during March-April. On the eighth day of the festival, the girls worship the goddess with oil lamps, flowers and turmeric. Apart from this, special poojas are organized here on the occasion of Navratri. The special thing about this temple is that it can be seen here from 4 to 5 in the morning.

Troubles are overcome by eating prasad
It is believed that a famous saint had dedicated his accomplishment to the mother, thereby ending the effects of snake bite poison. Due to this it was also known by the poison Harikkal Amma. Which was later changed to Pisarikkal. The offerings here are still used as medicine. Amavasya, which falls in the Thulam month of Malayam calendar, is considered to be of special importance for bathing and darshan here in the afternoon, which is called Vavravritta.