This Ambaji temple is about 1200 years old, there is no statue installed here …

On the day of Navratri, that is, the worship of Goddess Shakti, when everyone is engaged in the practice of mother Adishakti. At the same time, the nine forms of Goddess Mother are worshiped in these nine days. In such a situation, today we are going to tell you about a temple which is present in the western part of the country i.e. Gujarat. Actually, Ambaji’s temple is built in Danta taluka of Banaskantha district on the border of Gujarat and Rajasthan.

It is a very ancient one. This temple is considered to be one of the 51 Shaktipeeths. According to belief, this is the place where the heart of Mother Goddess Sati fell. It is also found in “Tantra Chudamani”.

Apart from this, a Sri Lantra is also installed here. This Shriyantra is decorated in such a way that one should see that mother Ambe is an interviewed Viraji here. It is said about the Ambaji temple that the Mundan ceremony of Lord Krishna was performed here. At the same time, Lord Rama has also come here to worship Shakti.

MUST READ : Katyayani Devi was revealed here, evidence is present in Skanda Purana 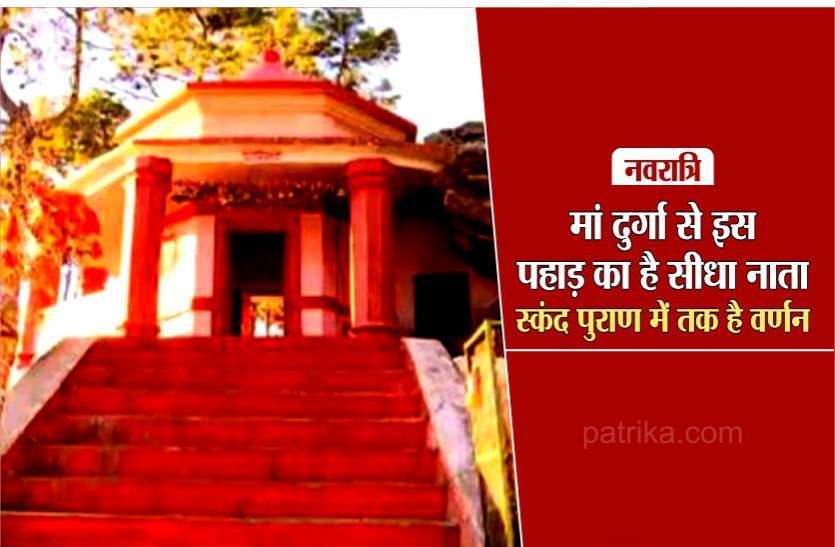 
At the same time, a small temple of Goddess on the summit of Gabbar mountain has a wall at the western end. Here the hill can be reached by living 999 stairs from below. A holy light is unbreakable in front of Shri Bijayantra in the Nija temple of Mata Sri Arasuri Ambika.

How to reach here
The famous pilgrimage site Ambaji temple in Banaskantha district of Gujarat is one of the 51 Shakti Peeths of Maa Durga and is thronged by devotees throughout the year. Ambaji temple is bordering Gujarat and Rajasthan. You can reach here by Rajasthan or Gujarat by whichever way you want.

The nearest station from here is Mountabu. You can also travel by air from Ahmedabad. Ambaji Temple is located 180 km from Ahmedabad and 45 km from Mountabu.

Ambaji Temple: Shikhar one hundred and three feet high
Ambaji’s temple is located on the Arasura range of the Aravalli range on the Gujarat-Rajasthan border, which is one of the most ancient temples in the country. The construction of the present structure of Sri Ambaji temple is believed to have been done by Suryavanshi King Arun Sen of Vallabhi in the 14th century. But if we talk about the history of this temple even before that, then it is known that in 1200 AD there used to be a grand temple here, which was destroyed by the Mughals after looting.

After which the work of renovation of this temple started from 1975 and has continued till now. This temple, built of white marble, is very magnificent, the shikhara of the temple is one hundred and three feet high. There are 358 golden urns on the summit. This temple made of white marble is very magnificent. The summit of the temple is 103 feet high. The peak is made of gold. It enhances the beauty of the temple. Devotees from abroad also come here to visit. It is one of the 51 Shaktipeeths where Mother Sati’s heart fell. It is also found in “Tantra Chudamani”.

The ancient Mansarovar pond of ancient times is also present on the back side of the temple. It is said that this tank was built by Mr. Tapishankar of Ahmedabad between the years 1584 to 1594.

Akhand Jyot: Worshiping Maa Amba with worship of Sriyantra
To say that this temple is also a Shakti Peetha but no statue of mother is installed in the sanctum sanctorum of this temple. This temple holds great importance for the worshipers of Shakti. Apart from this, Mother Amba is worshiped in this temple with the worship of Sriyantra which cannot be seen with the eyes. The priests here adorn this Shriyantra in such a wonderful way that the devotees feel that Maa Amba ji is sitting here in person. Near it, the sacred Akhand Jyoti burns, about which it is said that it never extinguished.

Gabbar mountain is special
About 3 kilometers from the temple, there is a mountain called Gabbar. The ancient temple of Mother Goddess is also established on this mountain. It is believed that a mother’s footprint is made on a stone. Along with the footprints, the mother’s chariot is also made. After visiting Ambaji, devotees definitely go to Gabbar. Every year on the occasion of Bhadrapadi Purnima a large number of devotees gather here. Devotees who gather at this temple on Bhadrapadi Purnima also visit the nearby mountain range called Gabbargarh, which is located two miles west of this temple. Special worship is offered to the mother on the full moon and Ashtami date every month. Photography is prohibited here.

Reach the court of Goddess Mother in this way-
The famous pilgrimage site Ambaji temple in Banaskantha district of Gujarat is one of the 51 Shakti Peeths of Maa Durga and is thronged by devotees throughout the year. Ambaji temple is bordering Gujarat and Rajasthan. You can reach here by Rajasthan or Gujarat by whichever way you want.

The nearest station from here is Mountabu.