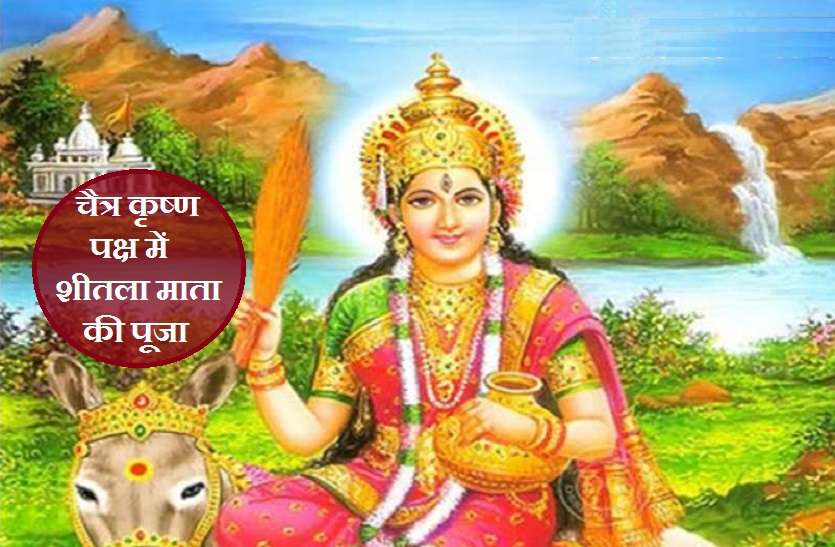 The fast of Sheetalashtami (Basoda) is only on Chaitra Ashtami. Shitala Mata is worshiped in Chaitra Krishna Paksha 7-8 days after Holi. It is believed that children do not get small pox by doing this pooja. In such a situation, the festival of Sheetla Ashtami will be celebrated on April 04.

One day before Basoda, sweet rice, sugar, etc. should be prepared. Five fingers, including hands, soaked moth, millet and washing the kitchen wall should be dipped in ghee and do a raid and offer Roli rice and sing the songs of Sheetla Mata.

After fasting and bathing on this day, bharati, roti, curd sugar, roli, rice, moongdal (soaked), turmeric, incense sticks, mother of a sacrament, moth, millet, etc. were made in a plate a day after retirement. All the things should be filled with water in a pot. This stuff should be touched by all the creatures of the house.

If someone fills the kundara here, then take one big kundara and 10 small kandaras. Then put rabri in a kundara, bhat in one, rasgulla in one, millet in one, grind turmeric in one and keep the money at will. Then keep these kundare in a big kudra and worship them with turmeric.

After this, all Sakundare and all worship material should be offered to Sheetla Mata and worshiped. After worshiping the Kudara, listen to the story. If someone has become a boy or is married to a boy, he should celebrate the end of worship. In the celebration of the end of worship, worship the same number of kundare as always.

The right boils occur in the body of Sheetla, due to which he has to remain naked. The smell of donkey drool provides relief in the pain of boils. In the house where the outbreak of this disease occurs, cleaning and sweeping of the Annadi is prohibited. Therefore, to keep these works closed, the brooms keep the head of the patient at the head. Keeping neem leaves does not cause rottenness in the patient’s abscess.

One day a fire broke out in that village, leaving only the old woman’s hut and burning everyone’s house. This surprised all the villagers. Then they all came to the old lady and started asking the reason for this.

On this, the old lady said that I used to eat cold food on Basoda day and used to worship Sheetla Mata, but Tul people did not do all this. So your houses were burnt and my hut survived.

Since then, the whole village started worshiping Sheetla Mata on the day of Basoda and everyone started eating cold food on that day. O Mother Shitla, protect everyone as you protected that old lady.

Story 02:
In ancient times, once the only son of a king came out of smallpox. In the same state, the son of a Kachhi was also found to be smallpox (Sheetla).
The Kachchi family was very poor, but the mother was a worshiper of Bhagwati. He kept up all the rules considered necessary from the religious point of view during the illness. Special care was taken to clean the house. Bhagwati was worshiped by the rule. Eating salt in the house was prohibited. Even the vegetable did not have any sting nor any food was fried. He neither eats the hot item nor feeds the son of Shitla. By doing all this, his son became well soon.

On the other hand, the king’s boy had an outbreak of Sheetla, since then he had started the Shatchandi text in the temple of Bhagwati. In that temple there were raj havans and sacrifices. Rajpurohit too would always be engrossed in the worship of Bhagwati. In the palace, there is a wide variety of hot and delicious hot dishes made every day. Also many types of meat were cooked.

Due to this, the smell of those special meals would prick the prince’s mind and he would insist on eating that food too. One prince was the only one on it, so all his demands would be met.

At this, the wrath of Sheetla on the prince began to increase rather than decrease. Along with Sheetla, large boils began to form in his body, in which there was more itching and burning sensation. The number of measures the king would have taken for the peace of Sheetla, the outbreak would have increased. The reason for this was that all the actions of the king under the ignorance were going in reverse.

This made the king more upset. He could not understand why even after doing all this, the wrath of Sheetla was not calming down.

One day the king’s detectives told him that Kachhi son had also got cold, but now he has recovered completely. Hearing this, the king got into thinking that I am doing so much service to Shitla, there is no lack in worship and rituals, yet my son is becoming more patient, while some son got well without any service.

In this thinking, he fell asleep. In the night, Dharini Bhagwati, wearing white clothes appeared in a dream and said – ‘O Rajan! I am happy with your service. That’s why your son is still alive today. The reason for not recovering is that you violated the rules to be followed at Sheetla. You should stop using salt in such condition.

Salt causes itching in the patient’s abscesses. Vegetables should not be sprayed in the house, because its smell tempts the patient to eat those things. Any visit to the patient is also forbidden because there is a fear of wetting the disease. Therefore, by following these rules, your son will definitely be cured.

After explaining all this, the goddess became impatient. As soon as dawn, the king arranged all the works according to the Goddess. This led to improvement in the health of the prince and he soon recovered. The king took out the order and worshiped Sheetla Mata in the homes.