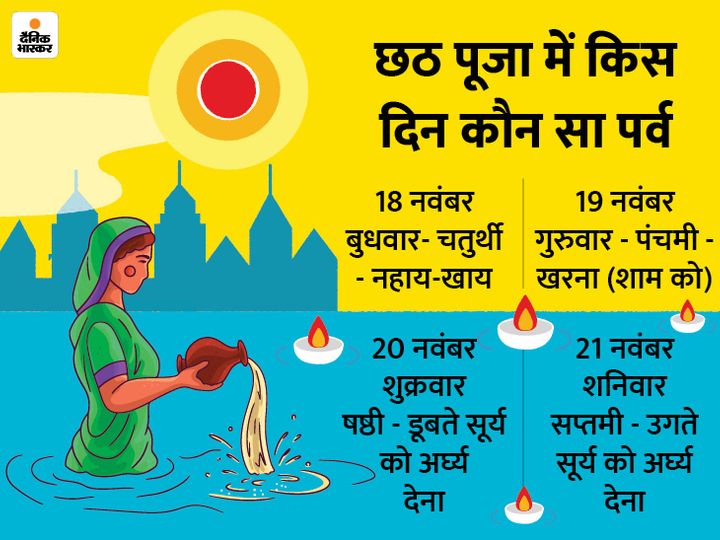 The biggest festival of Bihar, Jharkhand and eastern Uttar Pradesh is Chhath Puja on 20 November. Its festival starts today. In this, worship of Chhath Maiya and Arghya is offered to the Sun. This is the only festival in the whole of Bihar, which every class celebrates together. This festival lasts for four days. On the first day i.e. November 18, there is Nahai-Khay, on 19 Kharna, on 20 Chhath Puja and on 21st morning Sun will be offered to Arghya. It is a festival of gratitude to the sun and nature.

Why is sun worship considered important?

From the perspective of the Puranas, Surya is considered as one of the five deities, these Pancha Devas are Brahma, Vishnu, Shiva, Durga and Surya. Sun worship is essentially done at the beginning of any auspicious work. The position of the Sun is especially seen while getting married. In the Brahma festival from the Bhavishya Purana, Shri Krishna has told his son Samb the importance of sun worship. It is popular in Bihar that Sita, Kunti and Draupadi also did this fast in olden times.

Chhath Mata is the only sister of Sun

Chhath Mata is believed to be the sister of Suryadev. Those who offer water to Chhath Mata’s brother Surya on this date fulfills their wishes. Chhath Mata is the goddess protecting children. By observing this fast, children get a boon for a long life. It is mentioned in Markandeya Purana that nature has divided itself into six parts. The sixth part of this is best known as Mother Goddess, who is the Manas daughter of Brahma. It is also believed that Katyayani is the sixth form of Goddess Durga. 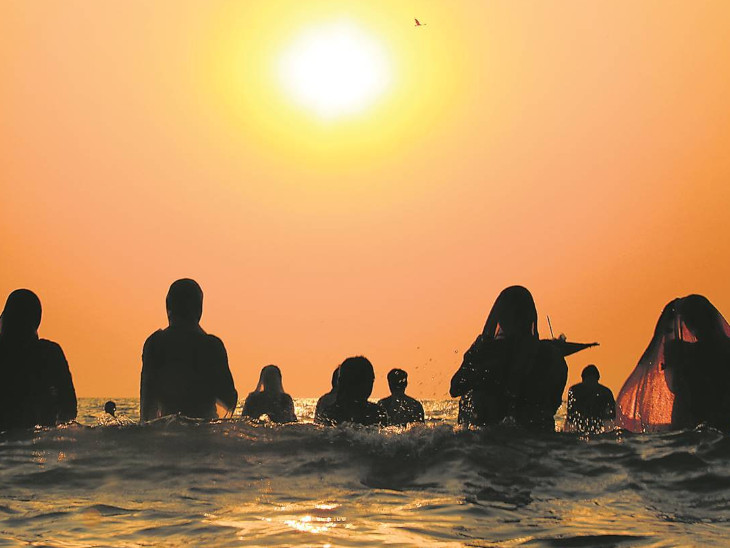 A person fasting for Chhath Puja remains waterless for about 36 hours. The fast is opened after sun worship on the morning of Saptami and food and water are taken.

Do cleanliness of the house in a bath

On Chaturthi date, two days before Chhath Tithi, the entire house is cleaned. It is called Nahay-Khay. On this day pure sattvic food is served after worship. With this, the beginning of Chhath festival is considered.

A 36-hour fast, worshiped without food and water

Nirjala fast is done for Chhath Mata, that is, people who do not drink water for about 36 hours. Usually these fasts are performed by women. It starts after Kharna on Panchami Tithi. Kharna means purification of body and mind. A person fasting in it receives jaggery or pumpkin pudding in the evening.

This is the story of Chhath Vrat

The story is of the golden age. At that time there was a king named Sharyati. The king had many wives, but only one daughter. His name was Sukanya. One day the king went hunting. Sukanya was also there. A sage named Chyavan was doing penance in the forest.

The sage had been doing penance for a long time, due to which termites were built around his body. Sukanya put some straw straws in the termite’s bambi while playing. The sage had his eyes on that place. The sage’s eyes burst from the straw. This made the sages angry, their penance broke.

When the king came to know about this, he went to the sage to apologize. The king handed over his daughter Sukanya to the sage for service. After this Sukanya started serving the sage Chyavan.

Sukanya was going to fill water one day in Kartik month, when she got a Nagakanya. Nagakanya asked to perform sun worship and fast on the Shashthi Tithi of Shukla Paksha of Kartik month. Sukanya fasted on Chhath with complete law and law. Chyavan Muni’s eyes were fixed with the effect of the fast. Since then, the festival of Chhath Puja started being celebrated every year.