Worshiping Suryadev not only brings happiness, prosperity, but also health.

The only visible deity of Surya Dev i.e. Kali Yuga, who is also considered as the King of the planets. At the same time, they also have a place among the Adi Panch Devas. The Sun God is considered to be of special importance in the Hindu religion.

Worshiping the Sun God keeps peace in the lives of people and some people wake up early in the morning and also offer Surya Namaskar daily along with water to the Sun. On the other hand, on the same day today i.e. March 14, 2021, the Sun changes the zodiac sign and is going to the Pisces zodiac.

The worship of Lord Surya dates back to the Vedic period. The Sun has been described in the Vedas as the soul of the world and the eye of God. Surya is recognized as the god of life, health and strength. According to belief, not only the attainment of happiness and prosperity is achieved by the practice of Suryadev, but health is also attained. The salutations to the sun are called congruent exercises.

MUST READ : This will change due to Sun’s transition to Pisces, know what the horoscope of India says 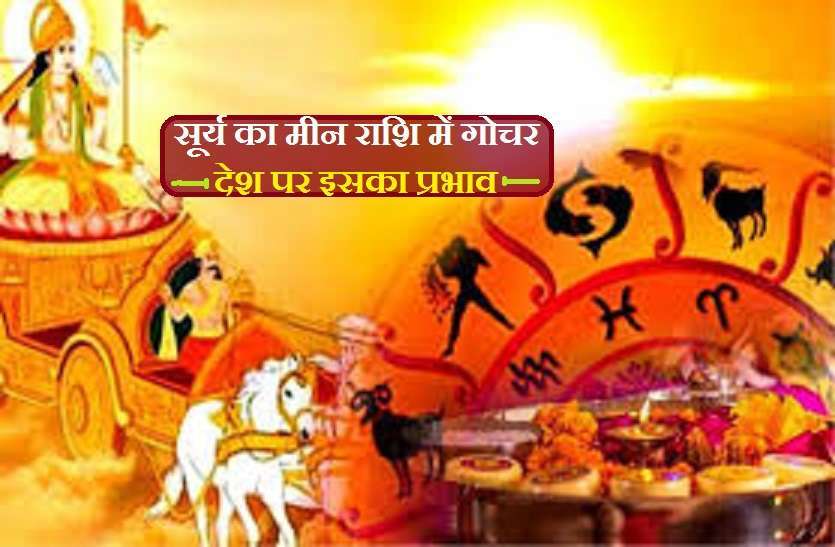 Life on earth remains intact only by the grace of Suryadev. The sages and sages have described the rising sun as a god of knowledge and described the worship and worship of the sun as extremely beneficial. The worship of the direct deity Surya is considered fruitful soon. Lord Shree Rama also did his work. Be aware that the ancestors of Lord Shri Ram were also Suryavanshis. Lord Krishna’s son Samb was also able to cure leprosy by worshiping the sun.

It is believed that the worship of Lord Diwakar, Suryadev, results in a renewable fruit. Pleased with the true spiritual practice, Lord Bhaskar blesses his devotees with happiness, prosperity and good health.

According to astrology, the Sun is considered to be the first planet in the Navagrahas and the lord of Bhava Karma of the father. Along with removing all the sorrows and diseases etc. related to life, those who do not have children, benefit from Surya Sadhana. For special benefit in father-son relationship, son should do Surya Sadhana.

Sun worship has been prevalent in India since the Vedic period. Earlier this practice was done through mantras but later their idol worship also started. After which his grand temples were built at all places.

Many temples of Lord Surya built in ancient times are still in India. Konark, Katarmal, Martand and Modhera are among the major ancient temples associated with the worship of the sun.

In the Sanatan tradition, the worship of the direct deity Surya has been considered to give fruit soon. To worship the Sun God, get up and take a bath before sunrise. After this, while watching the rising sun, offer water to them by saying ॐGhणिrī S सूरrya Namah. Add red roly, red flowers to the water given to the sun and give it water. After offering Arghya to the Sun, sit in a red posture and face the east and chant the mantra of the Sun at least 108 times.

Worshiping Shri Surya Dev on Sunday has many benefits. Sun God has very important benefits in our life. We get sunlight from them as well as lights. It is believed that if the Sun god’s aarti starts in the morning, there is happiness in the house.

Silence of the Three Praharas of the Sun
The practice of the three daylight hours of the sun is considered particularly fruitful.
1. Health is attained by meditation of the sun during the morning.
2. The midday practice makes the seeker increase in respect.
3. Surya Sadhana, especially done in the evening time, arouses good luck and brings prosperity.

Aarti of Sri Suryadev…
ॐ Jai Sun God, Jai Ho Dinkar Bhagwan.
You are the triple form of the world, the eye of the world.
Dharat is the only meditation, ॐ Jai Surya Bhagavan.
… Jai Sun God …
The charioteer Arun is Lord, you are the white lotus. You four arms.
There are seven horses, just like you. You are great God.
… Jai Sun God …

When you used to come to Udayachal in the summer. Everyone would then have a vision.
Ujiara spreading, awake then awake. Then everyone praises.
… Jai Sun God …

You are the triad creator, you are the basis of the world. Glory then infinite.
Used to give the devotees their own after sprinkling life. Strength, intelligence and knowledge.
… Jai Sun God …

Bhuchar Jalchar Khechar, everyone’s life is yours. You are the soul of all living beings.
Ved-Purana Bakhane, religion should be considered by all of you. You are the omnipotent.
… Jai Sun God …
Worshiping directions, Puja Das Dikpal. You are the guardian of the Bhuvanas.
Masons are your maidservants, you are eternal indestructible. Shubhakari Anshuman ..
… Jai Sun God …

ॐ Jai Sun God, Jai Ho Dinkar Bhagwan.
You are the trinity of the world, the form of the eye of the world.
Dharat is the only meditation, ॐ Jai Surya Bhagavan.