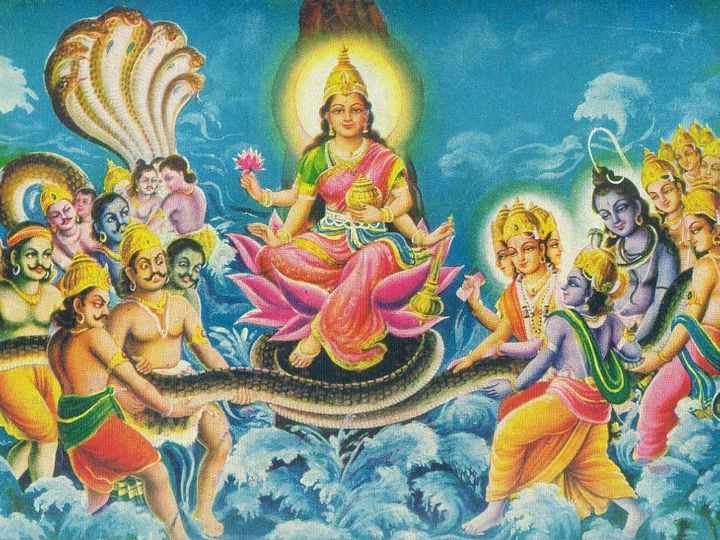 Today, Diwali is being celebrated on Saturday, 14 November. Worshiping Goddess Lakshmi on Deepawali has special significance. The story of Samudra Manthan is prevalent in relation to the origin of Lakshmi. According to Pt. Manish Sharma, Jyotishacharya of Ujjain, the story of Samudra Manthan gives us the message that we should churn our mind. In the process of churning the mind, first of all, the bad thoughts should be discarded. Even before the churning of the sea, poison was first released.

There were 14 gems in the Samudra Manthan. Life management formulas are hidden in all these gems. By adopting these formulas, we can avoid many problems. Know these sutras and sutras related to gems …

This is the story of churning the sea…

According to the prevailing legend, due to the curse of Maharishi Durvasa, the glory, wealth, splendor etc. from heaven had ended. Then all the gods went to Lord Vishnu. Lord Vishnu told him the solution to churning the ocean with the Asuras and also told that the ocean will churn out nectar, which will make everyone immortal.

When the gods told this thing to Bali, the king of the Asuras, they too agreed to churn the ocean. Vasuki Nag’s leader was formed and with the help of Mount Madaranchal, the process of churning the sea began.

Kalkut poison was first released from the churning

The poison named Kalkut first came out. Shivji took this poison around his neck. The message of Kalkut poison is that whenever the mind is churned out, first of all, bad thoughts come out like poisons. These bad thoughts should be discarded.

The sacred Kamadhenu was the divine cow producing the contents of the yajna. Therefore the sages kept Kamadhenu. The message of Kamadhenu is that the mind becomes pure after the bad thoughts come out of the mind.

The horse named Uchchashrava came out at number three

The high horse was white. It was kept by Bali, the king of the Asuras. The high horse ran at the speed of mind. If the mind keeps on running here and there, it tends towards evils. As the high horse went to the Asuras. Its message is that we should stop the mind from running around and should be directed towards God. Only then can you avoid evils.

Airavat was a very divine and white elephant, kept by Devraj Indra. Airavat elephant is a symbol of pure intelligence. Pure thoughts are pure in the mind free from evils. If thoughts are good then the mind will also be pure.

Kaustubh Mani was worn by Lord Vishnu on the heart. This gem is a symbol of devotion. When the bad thoughts come out of the mind, the mind becomes pure and thoughts pure, then devotion is awakened and only the devotee doing such devotion gets the grace of God i.e. the place in the heart of God.

Kalpavriksha came out at number six

Apsara named Rambha was very beautiful, it also went to the gods. Apsara is a symbol of lust and greed. When a person moves towards a goal, on the way he also finds misleading things. But, the person should not stop there. Must keep moving forward. Lust and greed can awaken in the mind while doing devotion, but we should avoid it.

Goddess Lakshmi wanted to keep Gods, demons and sages with her, but Lakshmi killed Lord Vishnu. Lakshmi means wealth. Wealth remains with those who value karma and hold on to religion. Lord Vishnu has given the message to continue to work through the avatars and follow the path of righteousness.

Fatigue was eradicated only by touching the Parijat tree. This was also accepted by the gods. The Parijat tree is a symbol of peace. When peace and coolness comes in the mind, body fatigue also disappears.

Panchjanya conch is at number 12

Panchajanya conch was taken by Lord Vishnu. The sound of the conch is a symbol of victory. This conch gives the message that after the peace of mind and body fatigue is gone, the churning process is moving towards the last phase i.e. all bad thoughts are destroyed, mind is calm, body fatigue is also over, Now the mind is ready to be engaged in devotion to God.

On the thirteenth and fourteenth, Dhanvantari appeared with the nectar urn. This means that at the end of the brainstorming process, nectar means the attainment of ultimate peace and bliss. A person’s mind is completely engaged in devotion. When we renounce all evils, calm the mind, only then can we do devotion.