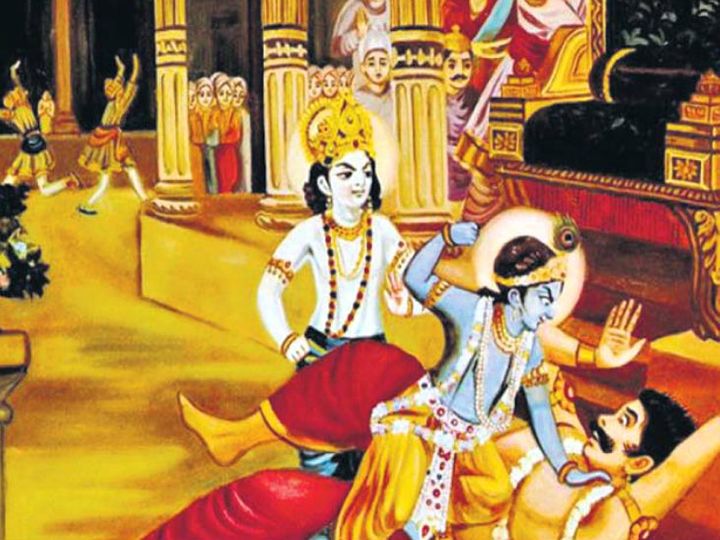 Narak Chaturdashi i.e. Roop Chaudas will start from around 3 pm on November 13 and will continue till 2 pm on 14th. There are different traditions in some parts of the country regarding this festival. On this day in Goa, effigy of Narakasura demon is lit on Rup Chaturdashi and Lord Krishna is worshiped. P. In Bengal it is called Kali Chaudas or Bhoot Chaturdashi. Kali Mata is worshiped on this day and fourteen kinds of vegetables are made. At the same time, in Punjab, Chaturdashi and Diwali are celebrated as Bandichhod Divas. They celebrate in memory of their sixth Guru Shri Har Gobind Singh.

Narakasura slaughter is done on Chaturdashi in Goa
On Chaturdashi in Goa, in the evening more than two thousand places are decorated with effigies of Narakasura and trips are taken in the streets and streets. The largest crowd takes place in the 196-year-old Mahalaxmi temple in Panaji. A big event is held there. In which the children running in the form of Krishna with the effigy of Narakasura, attack the effigy with arrows and chakras.
In this way many Narakasura tableaux emerge. The effigies of Narakasura are then burnt by placing them on a boat in the sea. This tradition of Goa has been going on for years. It is believed that Goa was earlier called Gomantak. King Narakasura was a tyrant here. He had taken the girls captive.
Then Lord Krishna killed Narakasura and rescued the girls. When the girls returned to their homes, they lit lamps. It is said that while slaughtering Narakasura’s blood was spilled on Lord Krishna as well. After this, the women of Goa bathed them with fragrant coconut oil.

P. Bhoot Chaturdashi in Bengal: Kali Puja and make fourteen types of greens
Kali Puja has the highest importance after Durga Puja in West Bengal. This puja is performed on the night of Chaturdashi before Deepawali. She is also called elder mother. According to Bhajo Bhattacharya, president of the Badi Maa Puja Committee, this puja has been taking place there since 1927. Kali Puja of Naihati in Pargana district is famous all over the state. People from all over the state come here to ask for vows. Is told. The vow made here is fulfilled.
In Naihati, the work of other idols starts only after the work of making the idol of the elder mother begins. Immersion is also first of these. The statue of the elder mother is about 21 feet high. Before the puja, the idol is decorated with 60-70 tola gold and about 150 kg of silver ornaments. Devotees also offer ornaments every year. These are kept in a bank locker and taken out in the morning on the day of worship. The puja takes place from late night till morning.
Roop Chaudas is known as Bhoot Chaturdashi in West Bengal. It is celebrated a day before Amavasya. There is a tradition of Kali Puja on this day. On this day, 14 types of greens are soaked in water. Sprinkle this water throughout the house. After this, make greens and eat them. It is believed that disorders like vata and bile in the body are controlled during the cold days due to eating it.

Bandhi Day in Punjab: Decorate the Golden Temple and have fireworks
In Sikhism, Chaturdashi and Diwali are celebrated as Bandichhod Divas. This festival has been celebrated every year since 1618. On this day, the sixth Guru of the Sikhs, Shri Hargobind Singh Ji reached the Golden Temple directly after freeing the 52 Hindu kings from the captivity of the Mughal Emperor Jahangir. Here Sangat welcomed all the kings from Deepmala. Since then Sikh community celebrates Diwali as Bandhichhod Divas. On this day the Golden Temple is decorated and illuminated with lamps.
Shri Hargobind Sahib Ji was kept captive by the Mughal Emperor Jahangir in the fort of Gwalior. In order to rescue Guru Ji, a group of Sikhs offered Ardas from Shri Aakal Takht Sahib and headed for the fort of Gwalior under the leadership of Baba Budha ji.
Seeing the increasing fury among the Sikhs, Sai Mian Mir ji asked Jahangir to get Guru ji released. Jahangir agreed. However, Guruji stood firm. His condition was that he would not be released alone. 52 Rajput kings will also be taken along. Jahangir had to accept this condition. After Guru Ji’s release, people lit lamps in their homes and celebrated in the Golden Temple. Since then lamps are lit in every house here on this day.