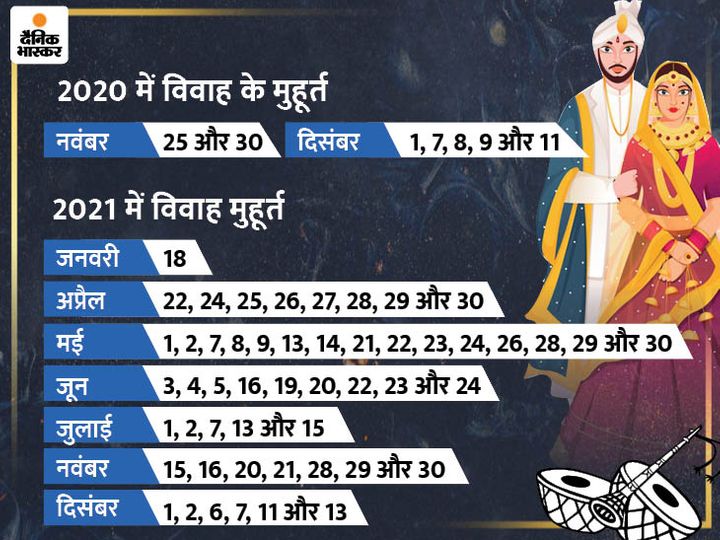 Devauthani Ekadashi will be celebrated on 25 November. From this day, the process of marriage and other auspicious activities begin. In the folk tradition, this Ekadashi is considered as Abuja Muhurta, so all kinds of auspicious things can be done on this day.

According to Pandit Ganesh Mishra, Jyotishacharya of Kashi, in November, Devuthani Ekadashi for marriage is just two days muhurat. At the same time, there will be 5 Muhurats for marriage in December. December 11 will be the last time of the year. At the same time, the next year will also be celebrated after passing half of April, because from January to March 2021 there is only one Muhurta of marriage, that is on January 18. After that, the auspicious days will start directly from 22 April.

Tulsi wedding day auspicious
Tulsi Shaligram is the tradition of marriage on Dev Prabodhini Ekadashi, so this day is considered auspicious for marriage. It is believed that a marriage done on this day never breaks and married happiness always remains. Apart from this, weddings are also done considering Akshaya Tritiya and Vasant Panchami as Abuja Muhurat.

In 2020 there were 49 Muhurta but only 26 days of marriage
From January to March this year, there were 19 Muhurats before Holi. Then mal mass started from March 15, followed by 23 Muhurtas from April to June in lock down due to Corona. Then during the Chaturmas, marriages were not held from July to 24 November. Now, from Devouthani Ekadashi till December 11, there will be a total of 7 marriage days.

Only 51 Muhurta in 2021
In 2021, there will be only 51 days for marriage. The first Muhurta will be on 18 January. After this, Jupiter and Venus will not be able to get married in the early months of the year. After Makar Sankranti, Guru Tara will be set from January 19 to February 16.

Then from 16 February onwards, Venus star will remain in place till 17 April. For this reason, the second marriage of marriage is on 22 April. After this, 37 days of marriage is the auspicious time of July 15, before Devashayan. At the same time, there will be 13 days for marriage from Devauthani Ekadashi on 15 November to 13 December.

Marriage will not be held on Vasant Panchami
Vasant Panchami is on 16 February. It is also considered to be an Abuja Muhurta for marriage, but on this day, with the sunrise, the Venus star will set. For this reason it is not counted in the marriage Muhurta in the Panchangas. However, due to folk tradition, marriages take place on Vasant Panchami in many parts of the country including Uttarakhand.