Shubh muhurat of this festival 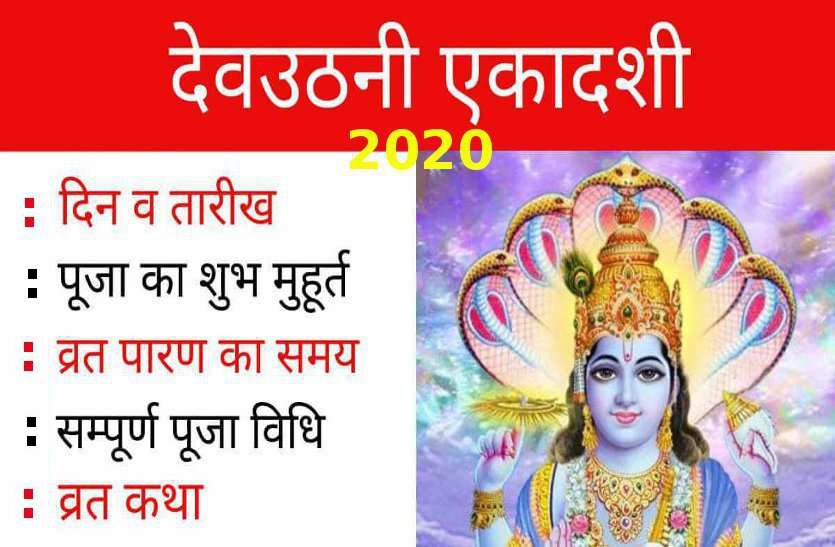 There is a tradition of Tulsi marriage on the day of Devuthani Ekadashi. On this day, Tulsi is married to Lord Shaligram, there is a legend behind it. In which Lord Vishnu tricked Vrinda with a Vishnu devotion to defeat Jalandhar. After this, Vrinda cursed Vishnu and made a stone, but after the request of Mother Lakshmi, she was corrected and became Sati. From their ashes, the basil plant was born and along with it the marriage of Shaligram started.

According to the Hindu calendar, a total of 24 Ekadashi falls in a year, while 2 Ekadashi dates occur in a month. Ekadashi of Shukla Paksha of Kartik month is called Devauthani Ekadashi. According to beliefs, Lord Vishnu sleeps for four months on Ashada Shukla Ekadashi and wakes up on Kartik Shukla Ekadashi.

Lord Vishnu lives in Hades …
According to the Vamana Purana, Lord Vishnu had asked for three feet of land to be donated to King Bali in the Vamana avatar. God covered the entire earth, sky and all directions in the first step. Took heaven folk in the next step. The third step Bali sacrificed himself and asked to be placed on the head. In this way, pleased with the donation, God made Bali the king of the Hades and asked for a bride.
Bali asked for a bridesmaid that God may reside in my palace. Seeing her devotion to the sacrifice, God gave her the boon of staying in her palace for four months. According to religious belief, Lord Vishnu resides in the Palace of Bali at Patala from Devashyani Ekadashi to Devprabodhini Ekadashi.

Devotthan Ekadashi Vrat and Puja Vidhi …
On the day of Prabodhini Ekadashi, Lord Vishnu is worshiped and awakened. Religious deeds on this day are as follows-

: On this day one should wake up in the morning and take a resolution of fast and meditate on Lord Vishnu.
: After cleaning the house, after taking bath, etc., should make the shape of the feet of Lord Vishnu in the courtyard.
: Drawing fruit from ocher in an oakhali, fruit, sweet, plum, water chestnut, season fruit and sugarcane should be put on that place and covered with a thread.
: On this day lamps should be lit outside the houses and at the place of worship.
: During the night all the family members should worship all the deities including Lord Vishnu.
: After this, God should raise the conch, bell-gongal etc. and repeat this sentence- Rise up Deva, Baita Deva, Anguriya Chatko Deva, New cotton, New cotton, Dev raise Kartik month

How to do fasting in this way: –
: Women who fast on the day of Devuthani Ekadashi, retire in the morning and make a square in the courtyard.

After this: Inscribe the feet of Lord Vishnu artistically.

: Then cover the feet of Vishnu in the bright sunlight of the day.

: Devothani Ekadashi should be accompanied by a well-written source text, Bhagavata Katha and Puranadi listening and bhajan etc. at night.

: Wake God by chanting this mantra with various types of sports, leela and dance etc.: –

After this, duly worship.

For worshiping, decorate the temple or throne of God with different types of creeper letters, fruits, flowers and Vandanbar etc.

: Draw a picture of Devotthan in the courtyard, then offer fruit, dish, water chestnut, sugarcane, etc., cover it with a lamp and light a lamp.

After this, pay a wreath with this mantra: –

After that pray this mantra: –

Also remember Prahlad, Narada, Parashar, Pundarik, Vyas, Ambarish, Shuk, Shaunak and Bhishmadi devotees and distribute Charanamrit, Panchamrit and Prasad. After that, sitting in a chariot, draw God himself and make him travel in the city, village or streets.

According to the scriptures, when Vamana God had left with three posts of land, at that time, the demon king Bali enthralled Vamanji in a chariot and drove him. By doing this, according to ‘Samutthite Tato Vishnau Kriya: Sarvaah Pravartayet’, Lord Vishnu tends to abandon yoga sleep and do all kinds of action. Finally listen to the story and distribute the Prasad.

Importance of Devauthani Ekadashi
Prabodhini Ekadashi is also known as Papa Mukti Ekadashi. According to religious beliefs, the virtue of which the devotees get by performing Rajasuya Yagya, more than that is obtained on fasting on this day. Devotees believe that by worshiping Lord Vishnu on the day of Devuthani Ekadashi, one attains salvation and after death attains Vishnu Loka.

Tulsi wedding ceremony
Tulsi Vivah is also organized on the day of Devuthani Ekadashi. This marriage of Tulsi tree and Shaligram is done with full pomp like a normal marriage. Since Tulsi is also called Vishnu Priya, when the gods wake up, the first prayer Harivallabha listens to Tulsi. Tulsi marriage directly means invoking God through Tulsi. It is said in the scriptures that couples who do not have a girl, must get married by marrying Tulsi once in their life.