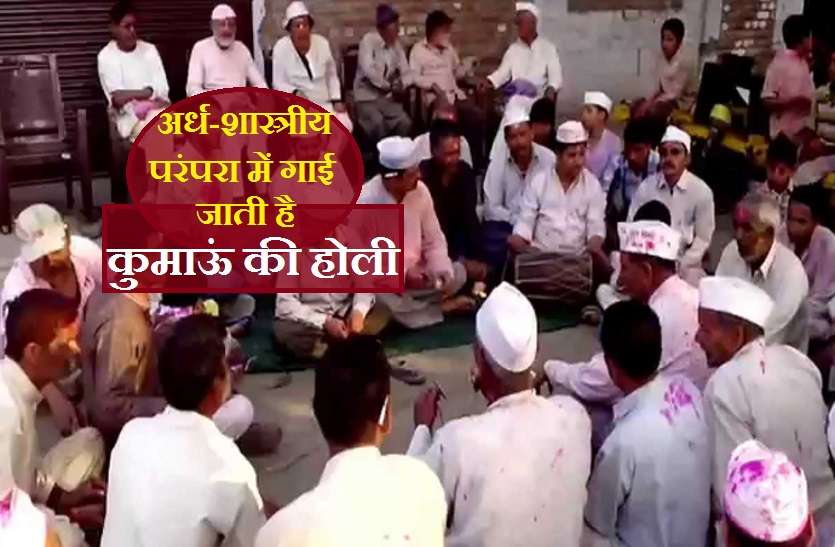 The festival of Holi is celebrated all over the country, but in India it is not only special in some special places, but it is also celebrated in a special way. One such special area is the Kumaon of Devbhoomi Uttarakhand …

There is a special love for Holi, as well as here Holi is considered special in many ways. Holi also has special significance here in Holi. Kumaon is the region in which these hilly districts of Almora, Nainital, Pithoragarh, Champawat and Bageshwar fall in Uttarakhand.

Holi is also celebrated with different specialties in the Kumaon region of Devbhoomi Uttarakhand region, like Ramlilaas, a festival of raga and phag. Actually, there are four modes of Holi in Kumaon – Khadi Holi, Sitki Holi, Women’s Holi, Typical and Swang.

The practice of Khadi Holi is usually done in Patangan (the courtyard of the head of the village). This Holi is sung in a semi-classical tradition where the main Holiars sing the mouth of the Holi and the rest of the Holiars repeat the mouth in a large circle around it. The drum drums compose music in it. The dance is also carried by mixing the steps in the circle, overall it is a different and local style.

The rhythm of which has its different characteristics and variations in different valleys. Khadi Holi is truly a symbol of village culture. It begins on the day of Amla Ekadashi with a rip bandage in the Pradhan’s courtyard or in the temple.

This Holi is blessed by Dwadashi and Trayodashi by reaching the songs of Holi in the courtyard of every Mawas of the village with instruments such as the Nishan of their village viz. The lord of that house welcomes all the villagers with jaggery, potatoes and other sweets in Holi according to their reverence and status.

Holi reaches and is played in the temples of the region on Chaturdashi. Chaturdashi and Purnima tribunals while Holika is burnt in the plains area here in the village of Kumaon region, rip-off is done in the public place of the village. The next day, Holi is concluded with a chaldi i.e. fallen colors and water Holi.

The tradition of singing Holi sitting in the classical music mode with harmonium and tabla is amazing. In the local traditions, there have been two or four amazing holiars in every city and village. Those who not only make Holi songs but keep their diary ready and carry this magnificent tradition to the next generation through Riyaz.

Holi in Kumaon begins with the welcome songs of spring, in which the songs of the first deity Ganesha, Rama, Krishna and Shiva, along with the hymns of several deities and songs based on them, are sung. With the coming of Basant Panchami, the singing of Holi starts increasing and

Apart from the grille quite in raga

And raga in Bageshwari

Etc. Holes are sung. With this, Holi meetings begin till Mahashivratri festival. Shiva’s hymns on the occasion of Shivaratri

Generally, the standing holes are considered more close to the folk tradition of Kumaon and the traditional holes here are called. These Holies are sung by sitting with drums and chains and standing in a specific manner. These days, with the intersection of Radha-Krishna in Holi, the dominance of Kshangar becomes prominent, these Holies are often sung in the Peelu raga.

Holi of women starts from the day of Basant Panchami and prevails till the vaccine on the second day of color, it is usually done by sitting. Dholak and Majira are its main instruments. Holi of women continues to receive new forms from their fusion by incorporating classical, local and film songs.

25- 30 years ago when the attraction of men towards Holi was decreasing in the society and evils of all the plains were joining the mountain Holi. The women then not only saved this cultural festival but also carried it forward.

In the farce and typical Holi, Holi is an incomplete mode of entertainment, without it Holi is incomplete. This mode is especially prevalent in the sitting Holi of women. In which different characters of the society and their message are presented through their clown dress and impressive satire.

It gives a different height to farce and typical Holi during the musical break. In the course of time, the mode of Holi and the genre of Swang also gave birth to some big artists.

While the festival of Holi is celebrated traditionally in every village of Kumaon region, but mainly Almora, Dwarahat, Bageshwar, Gangolihat, Pithoragarh, Pati, Champawat, Nainital have been centers of Kumaon culture.

Elements that understand the culture and its importance are present in the social fabric here. He knows that culture itself enriches society permanently. In these towns not only the color of Holi but also festivals like Ramlila, Diwali are celebrated with great seriousness and traditionally and this town is the main center of our culture.

Here women sit and celebrate Holi, Khadi Holi, Sangeet Holi from house to house. Women make fun of all kinds of ridicule. The festival of Holi is celebrated a month before the start of Holi and a month after the end of Holi.

Kumaoni celebrates this festival everywhere …
In fact, due to lack of employment in the mountains, many people have come from the mountains and settled in different cities of the country many years ago, despite this, they are still keeping their traditions with them. Due to this, even today, people who have come from Kumaon and settled there in all the cities of the country. Celebrates Holi on the lines of Holi of Kumaon with its Kumaoni society. Be it Delhi, Lucknow or Bhopal or Indore or any other city …

Actually, Holi of Kumaon is also known all over the country for its cultural specialty and it is not that this Holi has been confined to Uttaranchal only.

Rather, people of this society who have settled elsewhere also celebrate it in their own ways. Due to this, it is easy to see the splendor of this Holi in some areas of Bhopal where the Kumaoni people are inhabited in abundance.

In fact, many families of this society have been settled in many districts of the country for a long time, despite coming here, they have not left their cultural tradition. After a little change, people of this society still celebrate the festival of Holi in different areas of the city according to their tradition.

Under this, women organize a sit-in on the day of Holi, in which mostly the people of the society take part. At the same time, apart from Kumauni living in the Kolar region of Bhopal, they are organized in many other colonies where they are in abundance. During this time the singing of Holi here is based on the classical tune.

From the first week of Paush month and from the day of Vasant Panchami, the period of Holi begins in sitting in the villages. This color not only contains the commentary of Abir Gulal but also includes the classical tradition of singing Holi and Khadi Holi.

The unique traditions of rip and scar in Kumauni Holi …
In Kumaon, there are also distinct traditions of rag and scar bandhan. He is considered to have special significance in Kumauni Holi. On the day of Holikashtami, ‘China Bandhan’ is prevalent in temples somewhere in Kumaon. But most of the time, Ekadashi is done in public places in villages, cities, and observing Muhurta.

For this, colorful pieces of new cloth are tied as long as ‘rip’ from each house of the village. On this occasion, Holi is sung like ‘Kailai Bandhi Ragh Raghunandan Raja… Donor Ganpati Bandhi Rip to Siddhi…’. In this Holi, names of all the deities are taken along with Ganapati.

There is also the practice of ‘Cheer Haran’ in Kumaon. In the village, the rag is guarded day and night to protect it from the reach of other villagers. The tradition of tying the village to the next Holi ends after the rip theft is gone. In some villages, instead of the rag, there is also the use of the red flag ‘mark’, which, like the red white ‘marks’ used in weddings here, is considered a sign of the ancient monarchy in Kumaon.

It is said that some villages have got this ‘mark’ from the then kings, they traditionally use ‘mark’ in the Holi. After singing Holi in all the houses, there is also a unique tradition of blessing the name of the youngest male member, ‘Jeevan Lakh Baris… Ho Ho Holak Re…’, starting from the eldest member of the house.