His Holiness the court of Mata Bhadrakali, located in the Kamsyar Valley of Bageshwar, Almora in Devbhoomi Uttarakhand, has been a center of faith and devotion for centuries. It is said that the vow sought in this court of Mata Bhadrakali never goes in vain. Who, with reverence and devotion, offers flowers at the feet of the mother with her worship and reverence. He participates in the ultimate welfare.

This Dham of Mata Bhadrakali is located in the village of Bhadrakali in Bageshwar district, about 15 km from Kanda, in the place of Mahakali and about 40 km from the district headquarters, on the road leading to Bansh Patanshesherraghat via Saniudiyar. This place is so captivating that it is really hard to describe…

It is said that this temple is specially worshiped by Nag girls. In the context of Shandilya Rishi, the daughter of Shri Mool Narayan along with her friends discovered this place. It is in Bhadrapur that it is said to be the abode of Bhadranag, the son of Kaliya Nag. Bhadrakali is his delight.

The ancient temple of Mata Bhadrakali is situated in an unimaginable position on a large plot of about 200 meters width. The picturesque mountain river named Bhadreshwar flows within 200 meters of the cave below this plot. 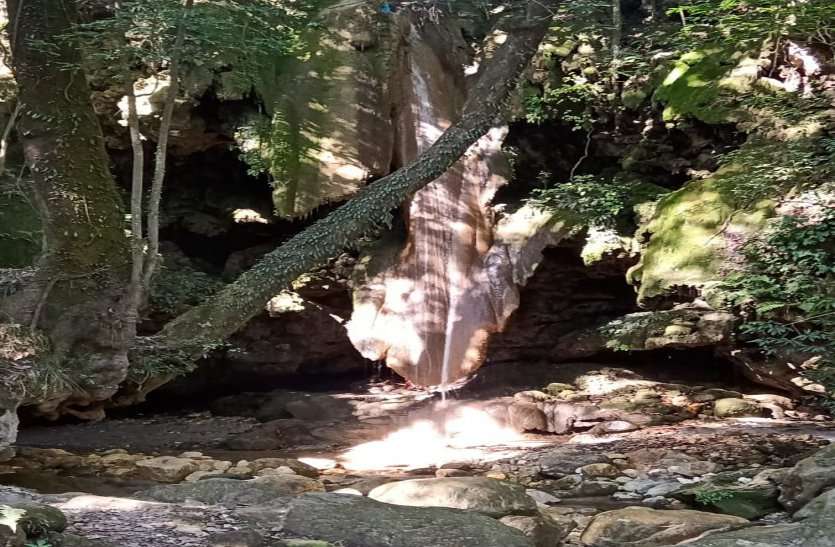 Bhadrakali Temple Cave
There is also a water pool called the huge Shakti Kunda in the middle of the river flowing in the cave, while in a small other cave above the river in the form of Lord Shiva-linga and immediately above them in the surface, Mata Bhadrakali Mata Saraswati, Lakshmi and Mahakali The three Swayambhu reside in the form of natural bodies.

There, a river flows inside the lower part of the cave. This entire river flows inside the cave, which is called Bhadreshwar River. There are jatas in the mouth of the cave, from which water keeps dripping all the time, some people believe that these jatas belong to Maa Bhadrakali, but according to some, these jatas belong to Lord Shiva because Maa Bhadrakali is born from the shoes of Lord Shiva. It is believed.

Here the philosophy of the three worlds takes place simultaneously on three surfaces. On the surface of the river below, there are Hades together, Shiva cave in the middle and Mata Bhadrakali darshan on the ground above.

According to local people, this supernatural abode of Mata Bhadrakali is said to be more than 2000 years old. People of Joshi family of Bhadrakali village have been continuously worshiping in this temple for generations.

In addition to Shrimad Devi Bhagwat, this place is also mentioned in the Manas section of Shiva Purana and Skanda Purana. It is said that Mata Bhadrakali herself did austerities at this place for 6 months. Here on the Ashtami Tithi of Navratri, devotees do austerities all night with lamps in their hands to get desired fruit. It is said that Shankaracharya’s feet also stood at this place.

It is said that the British also declared this place to be of immense religious importance and declared it to be tax free. Even today no fee is charged here.

Mata Bhadrakali was Kuldevi i.e. Ishtadevi of Lord Krishna. Few people know that one such divine and supernatural Virala Dham exists in the Kumaon region of Uttarakhand state called Devbhoomi, where Goddess Saraswati Lakshmi and Mahakali reside in one place together.

This place is also considered as one of the 51 Shakti Peeths of Mata. Based on the mention of Mata Bhadrakali, who came in Shiva Purana, the devotees believe that the right part of the dead body of Dakshkumari Mata Sati fell below the knee, when Mahadev Shiva took the sky from the sky to Kailash.

The fair held on the eighth day of the month of Chaitra in this temple is considered very important. On that day, people who come to visit here take a bath in the reservoir located here called Shaktikun. Bathing in this temple cures all diseases, it is believed by the people here.