to be safe must do ShriRam Raksha Stotra on this navratri

This year i.e. 2021 of English, Chaitra Navaratri is special in many ways. In such a situation, you can adopt a remedy this time, which will continue to give you fruit continuously throughout the year. Actually, this time Chaitra Navratri is starting from Tuesday, April 13, 2021.

At the same time, the new Hindu Samvatsar 2078 will also start from this day, even though the name is Rakshasa, but both the king and the minister of this Samvatsar is Mangal. And the causative god of Mars is always believed to be Sri Ram Bhakta Hanuman ji. At the same time, the beginning of Navaswatsar is also on Tuesday, where in astrology, Mars has been considered as a factor of might. On this day, there is also a law to worship Mother Durga, the goddess of power.

According to experts, this Samvatsar will be under the influence of Mars, while its factor is Sri Ram Bhakta Hanuman, in such a situation, the fruit of worship of Shri Ram will be fruitful in this Samvatsar. While the Navratri festival has special significance in Hinduism.

With this, all the dreams are fulfilled and it is considered a festival to get the blessings of Mother Adishakti. At the same time, it is also believed that those who start the recitation of Rama Raksha Stotra in Navaratri get special blessings of Maa Durga and Shri Ram.

Importance of Rama Rakshastra in Navratri…
On Navratri, Pandit Sunil Sharma says about Ram Rakshastra, that Ramayana shows that Shri Ram himself also appealed to Ravana to please his mother Durga before the war and asked her for strength. At the same time, since Ram Rakshastra is itself a defense shield, its importance increases in Navratri.

Also, the introduction of this Rakshastron in Navratri itself gives immense benefits as well as results soon. There is also a special thing that this lesson has to be done every day. 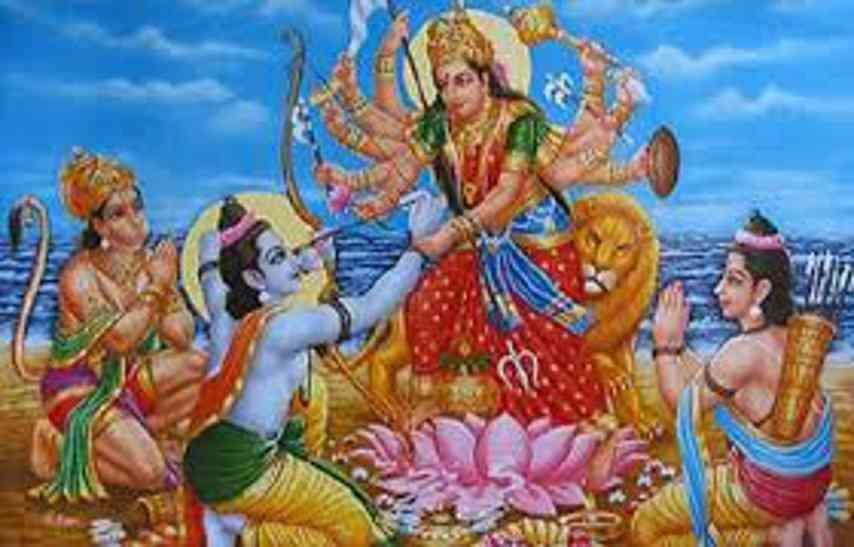 Shriram protects:
It is believed that those who recite this hymn are protected by Shriram. It is believed that Lord Shankar appeared in a dream to the sage Budkaushik, narrated Rama Rakshasa to him and wrote it when he woke up in the morning. This stotra is in Sanskrit language.

The continual recitation of this hymn also removes all the sufferings and ghosts of the house. At the same time, it is also believed that the person who recites this hymn will be longevity, happy, saintly, victorious and gracious’, such a virtue is stated in this stotra.

Apart from this, in this stotra there is an accurate description of Sri Ramachandra, the outline of Ramayana, Ramavandan, Rambhakta Stuti, Vandan and praise to the ancestors, glory of Ramnam, etc.

Ram Rakshastra: Take special care of these things…
The introduction of Ram Rakshastra on Navaratri has its own importance, during this time it is believed that by continuously reciting this source, all problems are overcome.

10 special mantras of Shriram in Navratri:
According to Pandit Anil Upadhyay, the power of the name Ram is infinite. Due to this, there is a tradition of rituals of Ramcharit Manas, Valmiki Ramayana, Sundarkand etc. in Navratri. Mantras are also chanted. Willing them or any one of them will undoubtedly fulfill fulfillment.
(1) ‘Rama’ This mantra is complete in itself and can be chanted even in the Shuchi-Ashuchi state. This is called the Taraka Mantra.
(2) ‘Ram Ramay Namah’: This temple is famous for the kingdom, Lakshmi Putra, health and destruction.
(3) ‘Om Ramachandray Namah:’ is the effective mantra to overcome the affliction.
(4) ‘ॐ Rambhadraaya Namah’: It is effective for removing the obstruction of work.
(5) “Om Janaki Vallabhoya Swaha” is worthy of chanting for getting the grace of God and fulfillment of desire.
(6) ‘Om Namo Bhagwate Ramachandray’ is chanted for the prevention of calamity and objection.
(7) ‘Shriram Jai Ram, Jai-Jai Ram’ is no match for this mantra. It is worthy to be chanted in an unconscious state.
(8) Shriram Gayatri Mantra ‘Om Dasharathaya Namah: Vidmehe Sita Vallabhoy Dhemihi Tanno Ram: Prachodayat.’ This Mantra is considered to be the mitigator of all crises and the one who gives Riddhi-siddhi. 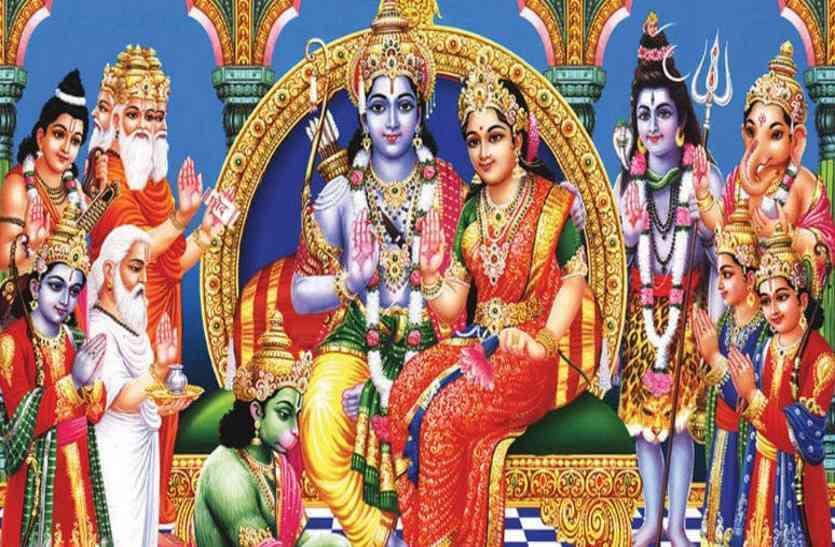 (9) ‘Om Namah Shivaya’, ‘Om Hanumate Shri Ramachandray Namah.’ This mantra performs many functions simultaneously. Women can also chant. Generally, mantras of Hanuman are fierce. Chanting with the mantras of Shiva and Rama ends their rage.
(10) ॐ Ramaye Dhanushpanaaye Swaha: ‘The enemy is paved for freedom from the problem of mitigation, court, trial etc.
One can get benefit in ritual form by chanting Ram Rakshastotra, Sundarkand, Hanuman Chalisa, Bajrang Baan etc.

The picture of Lord Hanuman and Lord Rama should be kept on the red colored cloth in front and should be chanted by worshiping Panchopchar. This is the simple and cosmic method.

Miraculous Couplets: Those Who Give Boons of Every Kind…
The festival of Ramnavami is important in Hinduism and it is celebrated with great reverence throughout India. At the same time, reciting Ramcharitmanas on the auspicious occasion of Ram Navami, removes all problems and also fulfills the desire of the mind.

(1) For wish fulfillment and prevention of all obstacles –
‘Kavan so kaj hard jaag mahi
What you are not, you can get. ‘

(7) For the attainment or enhancement of livelihood-
‘Join to fill the world.
Takar Naam Bharat Asaoi. ‘

(10) To destroy enemy-
Kairu sun koi, not by doing
Rampratap lost the oddity. ‘

Very special ways that will help you…
1. Take mustard seeds in a bowl. There should be any woolen cloth or posture under the bowl. Read the Rama Raksha Mantra 11 times and during this time you keep rolling the mustard seeds in the bowl with your fingers.

Keep in mind that during this time you are sitting on a pedestal and the Rama Raksha Yantra should be in front of you or the idol or photo of Shri Ram should be in front of you, seeing that you have to chant the mantra. It is believed that the mustard is proved by chanting eleven times and you should keep the seeds of that mustard in a clean and safe place of worship.

After this, when necessary, try some grains. It is believed that it gives success.

: If there is a dispute or a lawsuit, then take mustard grains on that day and put it where the opponent sits or throw it in front of it. It is believed that success will kiss your footsteps.

: In sports or competition or interview, you should take proven mustard with you and keep it in your pocket.

: Even if there is a possibility of harm, keep the mustard mustard together.

: Take along the journey, your work will be successful.

For this, just hold the copper vessel in your hand and keep your eyes in the water and feel that all your power is going into the water. At this time, keep your attention in praise of Shri Ram. Try while chanting the mantra

Chaitra Navratri: Four infallible miraculous mantras and their fruits …
Everybody wants to worship Goddess in Navratri with full devotion, so that there will be peace and happiness in the family. But due to the lack of time, worship is sometimes not done with the same method as is expected.

In this regard, Pandit Upadhyay says that if you chant any of the 4 divine mantras in 9 days, then the fast results in fasting.

Fruit of the Mantra – This mantra is used for all types of siddhis. Shaktimaan can be benefited by using this mantra to become a Bhumivan.

Mantra fruit – Chanting the above mantra leads to success in learning.

Fruit of the Mantra – By chanting the above Mantra, one gets the blessings of Goddess Lakshmi.

Fruit of the Mantra – This mantra is done to attain Tantric attainment.

That you should know the meaning of every sentence.

Chaitra Navratri: Four infallible miraculous mantras and their fruits …
Everybody wants to worship Goddess in Navratri with full devotion, so that there will be peace and happiness in the family. But due to the lack of time, worship is sometimes not done with the same method as is expected.

In this regard, Pandit Upadhyay says that if you chant any of the 4 divine mantras in 9 days, then the fast results in fasting.

The result of the mantra – This mantra is used for all types of siddhis. Shaktimaan can be benefited by using this mantra to become a Bhumivan.

The result of the mantra – Chanting this mantra leads to success in learning.

The result of the mantra – Chanting this mantra gets the blessings of Mother Lakshmi.

Fruit of the mantra – This mantra is done to attain Tantric Siddhi.

Keep this special attention in worship…
At the same time, it is considered more creditable to keep some special things in mind during Ram Rakshastra. According to Pandit Anil Upadhyay, while reciting Ram Rakshastra, the devotee should keep in mind that the verse he is reciting should have the same position of Shri Ram in his mind.

That is to say, in the same way, stay focused on the feet of Rama during this time and feel yourself in front of him and feel his refuge.

That is, while worshiping this mantra, bring meditation in the mind according to the verses of Lakshmana and Mother Sita etc. on the left side of Shri Ram.