While Krishna Chaturdashi i.e. Narak Chaturdashi of Kartik month is also called Chhoti Diwali, after this, Amavasya is celebrated as big Diwali, while Poornima celebrates Dev Diwali / Dev Deepawali Dev Deepawali, also known as Budhi Diwali in many places. Huh. This time, the full moon date will start from 12 noon to 47 minutes on November 29, 2020 and will continue till 02.59 on the next day i.e. November 30, 2020. 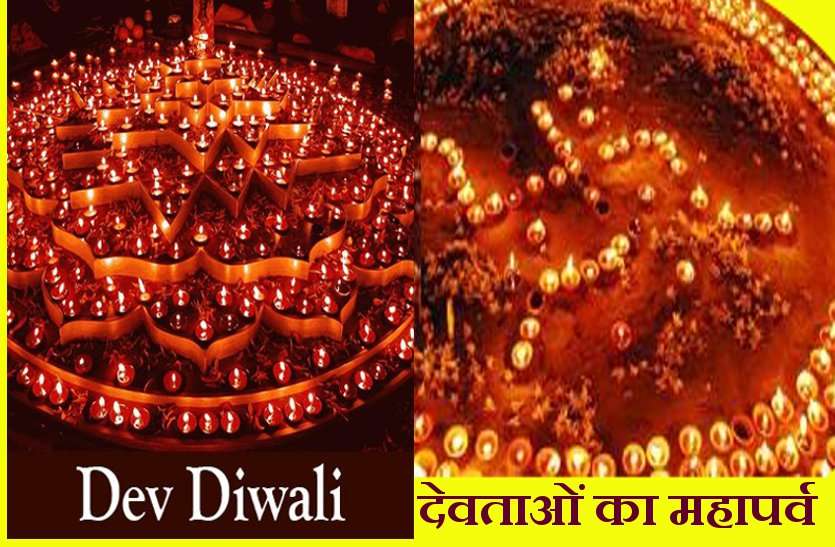 According to the beliefs of Hinduism, Narayan wakes up from his 4-month sleep on Devauthani Ekadashi a few days before Kartik Purnima. In whose joy all the gods descend from heaven and celebrate the lamps on the Ghats of Benares.

Apart from this, according to another belief that on this day Lord Shankar killed Tripura named Tripura and freed Kashi from his wicked. After which the Gods performed the Mahaarti of Lord Shankar with their commander Kartikeya on this Kartik Purnima day and decorated this holy city with lamp garlands.

Mahaparva of Gods: Mahaparva of gods
After this, the Gods performed the aarti of Lord Shankar with their commander Kartikeya on this Kartik Purnima day and decorated this holy city with lamp garlands. Built in traditions and cultures, Kashi is recognized in the country world by Baba Vishwanath, Ganga and its holy Ghats. If any festival attracts people to this city after the evening aarti of Shiva worshiping Shiva and worshiping Ganga, then it is the god Deepavali, which is also considered to be the Mahaparava of the gods.

In such a situation, Kartik Purnima i.e. Dev Diwali is the festival of Hindus which is mainly celebrated in Varanasi, Uttar Pradesh. This is the culture and tradition of the oldest city of Kashi in the world, this festival is celebrated fifteen days after Deepawali. On this day the river Ganges is worshiped and millions of lamps are lit. The tradition of Devidwali was first started in 1915 by burning thousands of lamps.

In such a situation, today we are telling you 05 such tasks, which are considered auspicious to do on the day of Dev Diwali.

1. Bathing in the river- Bathing in the holy river has been in vogue and importance throughout the month of Kartik. In this month, Shri Hari lives in water. It is believed that keeping a restraint on the senses in Kartik month, in the presence of the moon and stars, bathing should be done regularly before sunrise to attain virtue. Taking a bath on the full moon day is considered very good.

2. Tulsi Puja – Along with Shaligram, worshiping, consuming and serving Tulsi is very important on this day. The importance of Tulsi Puja in this Kartik month has been considered manifold.

3. Poornima fast – Fasting on this day is also very important. By fasting on this day, the remembrance of God, contemplation brings the same fruit as the Agnishtom Yagya and the attainment of Suryaloka. Starting from Kartiki Purnima, fasting and awakening every full moon at night fulfills all desires.

4. Deepdan – On the day of Dev Diwali, all the gods come to the ghat of the Ganges and light the lamp. Therefore, on this day, do a lamp donation in places like river, pond etc.

5. Donation- Donation also has a great importance on this day. Do whatever you can donate food grains, clothing donations and others as per your capacity.

1. On the day of Dev Deepavali, the seeker must take a Ganges bath and after bathing must wear clean clothes.

2. Lord Shiva and Lord Vishnu are worshiped on this day. But before worshiping them, worship Lord Ganesha duly.

5. Finally offer sweets to Lord Shiva and Lord Vishnu and light a lamp at Ganga Ghat at the time of Sham. If you cannot do this, then light the lamp at the main door of your house.

It is religious belief that on this day all the gods come to celebrate happiness in Kashi. Therefore the entire Kashi is decorated with lights. The Ghats of Benares are illuminated with lamps.

According to mythological belief, Lord Vishnu wakes up from 4 months of sleep on Devauthani Ekadashi a few days before Kartik Purnima. In whose joy all the gods descend from heaven and celebrate the lamps on the Ghats of Benares.

: There is another belief that on Diwali, Mata Lakshmi wakes up before her lord Lord Vishnu, hence the Diwali of the gods is celebrated on the 15th day of Diwali on Kartik Purnima.